North and South American airline stocks were a mixed bag on Wednesday (22-Sep-2010), despite a decline in wider markets. The Dow (-0.2%) slipped, after the Federal Reserve decided against new stimulus spending but stated they would be prepared to act if the economy continues to “cool”.

Elsewhere, American Airlines (-8.7%) suffered the biggest fall of the day, after the release of its 3Q2010 the day prior resulted in a number of analysts reducing their estimates.

Continental Airlines (-3.5%) also declined, despite stating during trading that it expects cargo, mail and other revenue to reach USD390 million for the three months ending 30-Sep-2010. The carrier also expects to end the quarter with between USD4.1 billion and USD4.2 billion in unrestricted cash, cash equivalent and short-term investment.

JetBlue (-2.8%) was down after Zacks initiated coverage of the LCC with a "neutral" rating. The analysts stated they believe the carrier will continue to benefit from its recently “launched Sabre system, improved pricing, higher traffic, additional ancillary revenue opportunities and future commercial partnerships”. However, the analysts believe the potential of the carrier’s stock may be limited by its “large exposure to New York metropolitan area, competitive threats and fuel price volatility”.

Hawaiian Airlines (+1.8%) rose after CEO, Mark Dunkerley, stated the carrier is seeking to expand its network with new destinations and aircraft, with a particular focus on Asia’s growing leisure-travel market. Mr Dunkerley added that "demand is coming back". 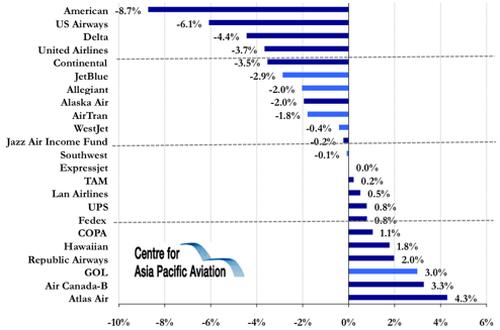