Continental Airlines’ 20% yield reduction in May screams; “What economic recovery”?

Continental Airlines’ average yields across its entire network plunged by one fifth last month, as the airline slashed its fares in a desperate bid to maintain load factors amid intensifying competition and weak demand. Continental Airlines estimates consolidated (mainline plus regional) passenger revenue per available seat mile (RASM) decreased between 19.5% and 20.5% year-on-year, while mainline passenger RASM decreased between 19.0% and 20.0%.

May’s yield results could be the weakest for the year to date (Continental revises the RASM figures in subsequent monthly reports) outstripping the 19.6% plunge in March. The carrier reported consolidated RASM fell 13.1% in Apr-2009 - a month buoyed by the Easter holiday period. RASM has certainly not improved summing the increases over two years, with the combined May-2008 and May-2009 figure down 12.3% compared to a 10.2% decrease for the two April months combined and a 13.3% reduction in Mar-2008 and Mar-2009 combined. 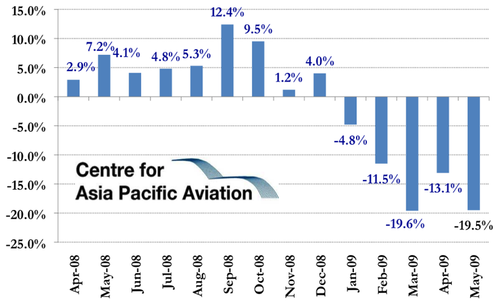 Continental does not provide a breakdown of domestic versus international RASM in its monthly reports, but both are expected to have been under pressure last month, particularly trans-Atlantic yields.

Continental estimates that the swine flu outbreak reduced consolidated passenger revenue by USD30 million in May-2009.

Airlines are also confronting steep increases in jet fuel prices, though the impact has been softened for non-US carriers by the depreciation of the greenback. For US carriers, the triple whammy impacts of weak demand, low yields and higher oil costs will see many report deep losses again in the second quarter.

Across the Atlantic, British Airways’ CEO, Willie Walsh, has declared the airline is in a “fight for its survival”, as it confront the “greatest challenge our industry has ever faced”. European traffic for May-2009 is showing double-digit declines in most markets, and probably even deeper falls in average fares. If this continues for much longer, another deep capacity retrenchment by established carriers is inevitable.

As for Continental, investors are clinging to the so-called 'green shoots', sending the carrier's shares up 7.8% yesterday. Until we see some stabilisation in airline yields - which are a key indicator of underlying economic health - we are unlikely to see those green shoots bud into anything substantial.