It is getting harder to compare apples with apples in the regional industry as it has transformed into a small group of holding companies. The sector is undergoing restructuring as the Delta/Northwest and United/Continental mergers aptly illustrate.

The fall-out from the Delta/Northwest merger has revealed much of how mergers affect regionals as all but one was sold to the regional holding companies. Comair remains the only owned regional and it is believed that its costs have always been a barrier to further consolidation. Likewise for American Eagle. When asked about acquiring these two operations, even regionals extremely interested in growing their once-limited portfolios, shy away. Even so, Eagle may present the only growth opportunities in the industry, given American’s plans for divestiture or restructuring of the high-cost carrier.

Regionals are only at the cusp of the United/Continental merger but the major carrier has already signalled its intentions to consolidate as illustrated by SkyWest’s acquisition of ExpressJet. It has also redeployed 70-seat jets to Continental hubs under a codesharing loophole in Continental’s scope clause. The signals suggest growth opportunities ahead but that must be tempered by the elimination of duplicative services now that the two majors are one. As we’ve seen with the impact of international joint ventures this will likely eliminate some capacity as the two strategically plan for efficiency.

One big opportunity will come if Continental gains scope relief and if that should happen expect the wholesale elimination of ExpressJet’s 50-seat jets just as we have seen with Delta. With fuel costs this high, their elimination is inevitable but scope relief will definitely accelerate it.

Indeed, should United/Continental gain scope relief, something not readily assured given scope’s importance to mainline pilots, these signals clearly show there are some opportunities awaiting Continental Express operators. In fact, if scope relief comes to the entire industry, regionals could at least start growing again but that, indeed, is a big “if”.

The other big opportunity in the offing is American Eagle. In a letter to ALPA MEC members, AMR Chairman Tony Gutierrez revealed plans to make American Eagle compete with other regionals for American’s business. That means a huge opportunity for most cost-efficient regionals given Eagle's legendary cost disadvantages which were confirmed in Mr Gutierrez’s letter to pilots. Even if it is diversified, an ALPA investigation of the internal workings of Eagle concluded it would be unlikely to survive as a stand-alone carrier.

It is now well known the greatest pressure is coming from Delta with the consequent reversal of fortunes for its partners as can be seen in its actions against Pinnacle, Mesa and SkyWest. But Delta is not alone in cutting back or stemming the historic growth rates of the regional industry.

Even so, regional financials indicate the pressure US regionals are under from their mainline partners. The growth at Pinnacle and SkyWest belies the fact they are benefitting from their acquisitions of Mesaba and ExpressJet, respectively. It is clear that, as with the domestic operations of their mainline counterparts, the industry is not growing. Even with the potential opportunities presented by United and American, that will likely mean a more shifting of current capacity than actual growth.

The future prospects of SkyWest without the addition of ExpressJet paints a dismal picture even as ExpressJet contributions kicked in last October. 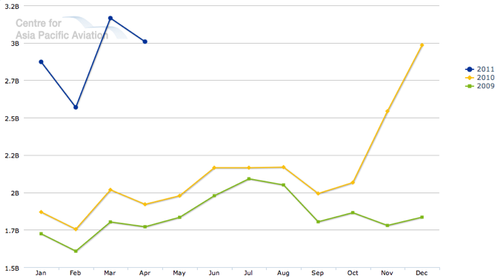 It is even more pronounced at Pinnacle which is now enjoying the spike received from Mesaba. 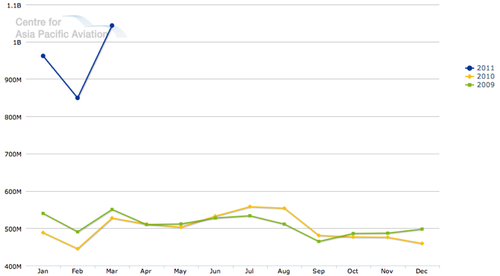 Pinnacle’s loss is not much of a surprise given the fact it won’t starting reaping the benefits of all its changes – as well as the consequent increase in Delta CPA rates – until next year. It is little wonder executives there are saying 2011 is another transition year but they are very excited about the future.

But one has to wonder whether their good fortune has come out of the hides of their competitors. It will be interesting to hear the answers at this week’s Regional Airline Association meeting. Regionals reported flat operations from Delta Connection but American and US Airways, it seems, are relying more on their regional partners, judging from ASMs. Perhaps, for American, the increase in Eagle ASMs is more reflective of the restructuring to its five cornerstone markets.

Horizon’s and Alaska Air Group regional stats can’t be compared with other regional programmes owing to the fact they are much smaller operations but also because during the past year they have restructured Horizon into a more traditional CPA deal which meant the suspension of Horizon’s branded operations. However, some of Alaska’s regional ASMs will come back as SkyWest begins serving routes still needed to feed Alaska’s operations.

For now, the future is far from secure for regional operators as US domestic operations continue to remain flat. It will be interesting to see the impact of the post-labour day capacity shifts but if the past is a prologue, it can’t be good, especially given that some regionals had very short-term contracts for their Express work.