Boeing and Airbus have differing views over many things, but perhaps most crucially, the likely pace of recovery for the aviation industry.

Boeing VP of Marketing, Randy Tinseth, has outlined the US manufacturer's expectation of a gradual recovery process, with the global economy getting back on track in 2010 and airline traffic recovering in 2011 and returning to growth in 2012 - ie lagging the economy.

But Airbus is more optimistic. The European manufacturer expects traffic to decline by approximately 2% this year, but is forecasting a sharp swing back in 2010, anticipating growth of approximately 4.6%, reaching as high as 7% in 2011.

IATA’s latest traffic data shows that passenger demand, as measured by RPKs, has declined 6.8% for the year to date.

While there has been some recent demand improvements (Jul-2009 IATA traffic was down just 2.9%), Airbus’ outlook appears overly optimistic, particularly in the light of several gloomy comments by airline CEOs recently.

The only region to have shown growth this year is the Middle East, where passenger traffic expanded by 8.2% over the first seven months of 2009.

And, even with demand improvements, there are few signs of a recovery in yields and revenues. IATA has suggested that the industry is witnessing a structural shift towards the back of the aircraft, with passengers trading down to cheaper seats in the face of recession pressures. It is unclear whether these passengers will migrate back to the front of the aircraft once economic conditions improve.

Meanwhile, Airbus has replied to US claims regarding the EUR3.1 billion in launch aid pledged by European governments for the A350 XWB programme. The manufacturer stated it has "absolutely no plans to change the funding for the aircraft" and strongly believes that reimbursable launch aid is a “very good way of launching aircraft programmes”.

As easy as A-B-C? China joining the club

Boeing and Airbus may not have it all their own way in the future. China’s state-owned AVIC has unveiled its new C919 narrowbody design this week, which it aims to use to break the large commercial aircraft duopoly enjoyed by Airbus and Boeing. The 190-seat aircraft is expected to be in service by 2016, mostly with domestic customers.

China's Commercial Aircraft Corp Chief Designer, Wu Guanghui, stated "the C919 comes after Airbus and Boeing, so you will have A-B-C in the aviation industry".

Boeing expects Chinese carriers will order around 2,600 new single-aisle aircraft in the next 20 years, potentially a USD200 billion market. Russia is also eager to break into the commercial aircraft market, unifying its manufacturers under UAC in 2006.

Boeing traded up 0.7% on Tuesday, while EADS, Airbus’ parent, was up 0.6%. Embraer rose 4.4% yesterday, with reports that a complaint filed with the EU’s competition watchdog against Bombardier has forced Britain to reduce government funding to Bombardier’s CSeries project by 27%, to USD184.5 million. Another complaint, modeled on the ongoing WTO case between Airbus and Boeing, has reportedly been filed.

Meanwhile, Canadian simulator manufacturer, CAE, was down 0.3% after the company cautioned that its Q2FY2010 results will be “hit hard” by the ongoing downturn, although it expects business to recover over the rest of the year. The company is experiencing lower usage rates at its training centres have, affecting margins, as well as leading to some temporary shutdowns of some operations.

CAE plans to reduce its workforce by 700 over the financial year, and is also offering extended vacation times for some employees. A restructuring programme is expected result in a CAD32 million one-off cost this year, but is expected to save approximately CAD15 million p/a.

The aircraft leasing sector could also be in for another shake-up, with the Royal Bank of Scotland Group reportedly appointing Goldman Sachs Group to seek out a buyer for its RBS Aviation Capital aircraft leasing unit. The unit has total assets of approximately USD8 billion, although its sale price is reportedly expected to be much lower.

The market has been wary of the potential of distressed sales of major aircraft leasing companies in the fallout from the global financial crisis, as major financial groups sell off assets to satisfy bailout requirements or undergo administration. AIG’s leasing unit, ILFC, has been on the market for more than 12 months, while Babcock & Brown Air is also up for sale. 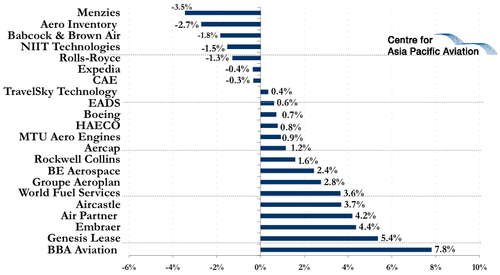