Latvian national carrier airBaltic has found itself in a tough spot after recording a heavy loss in the first five months of 2011, an issue which has culminated in a shareholders conflict over the airline’s strategy and management.

airBaltic, 53% owned by the Latvian government and 47% owned by Baltic Aviation Systems Ltd, an offshore investment vehicle of President and CEO Bertolt Flick, made a loss of LVL13 million (EUR18.3 million) in the first five months of 2011, according to Latvian Transport Minister Uldis Augulis. The real damage was done in the seasonally weak first quarter, when the hybrid carrier recorded an LVL18 million loss, which was offset by a LVL5 million profit in the following two months. The audit was prepared for the government for it to clarify the airline’s financial position, which had been subject to increasing speculation and political feuding.

Passenger traffic growth at airBaltic has been mixed this year, following the airline’s aggressive expansion in 2010 across the Baltic region and into Finland. Numbers fell for five consecutive months from Nov-2010, before the airline managed to get back into growth mode in the ash cloud-affected Apr-2011 result. 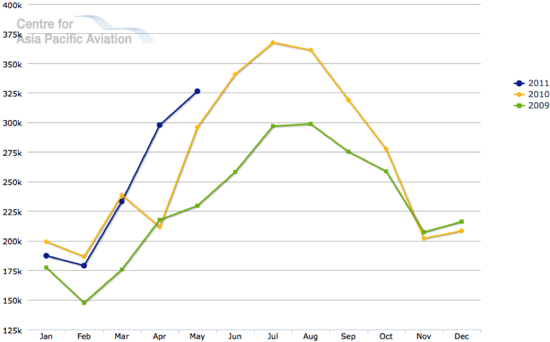 Ryanair has been aggressively moving into the Baltic market and is a key reason for the slowing growth. The Irish LCC now operates from four ports (Riga, Tallinn, Vilnius and Kaunas) in the region and focuses exclusively on routes to Western Europe, airBaltic’s largest market by capacity. 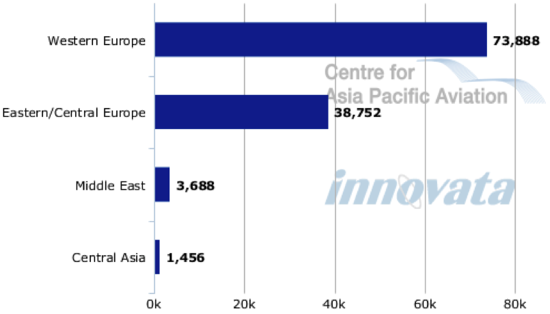 Wizz Air opened its 14th base in Vilnius on 16-Apr-2011, which is also likely to make life difficult for airBaltic. The entry of some of Europe’s largest LCCs has resulted in airBaltic downsizing its presence at Vilnius “due to crowding” in the market. Vilnius remains the second-busiest airport in the Baltic region, behind Riga International Airport.

Finnair and European regional specialist flybe have also announced plans to expand in the region by relaunching Finncomm Airlines as Flybe Nordic. The joint venture carrier will focus on domestic Finnish routes and short-haul international services, two spaces in which airBaltic plays. 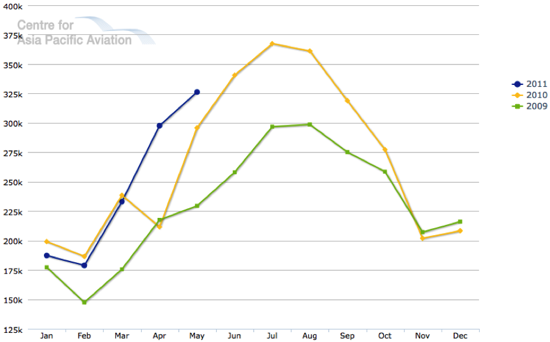 airBaltic’s load factors are trending in the right direction, although the ugly picture for winter loads is evident in the graph below and highlights the difficulty in earning the cost of invested capital in those quieter months. Load factors bottomed out at 58% in Jan-2011, which was actually a year-on-year improvement but the figure shows the lengths to which airBaltic must go to defend its market share against the aggressively expanding and arguably lower-cost Ryanair. 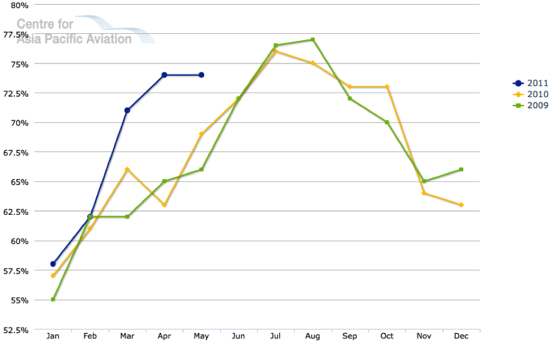 airBaltic’s winter struggles have caught the attention of the Latvian government, which is the largest shareholder in the airline. Finance Minister Artis Kampars on 10-Jun stated that the company was close to insolvency, with the government growing concerned that its funding was being "leaked" to unspecified offshore companies. Prime Minister Valdis Dombrovskis claimed in Jun-2010 that he is unsure whether CEO Bertolt Flick is working in his own interests or in the interests of airBaltic and Latvia. According to Dombrovskis, the problems at airBaltic are a result of an unfavourable shareholders agreement former Transport Minister Ainars Slesers signed with airBaltic, which reportedly gives full control of the airline's operations to minority shareholder Baltic Aviation Systems Ltd, which is owned by Flick. The prime minister has already approached the Prosecutor General's Office to evaluate Slesers' actions.

Transport Ministry spokesman Aivis Freidenfelds stated in Jun-2010 the Ministry believes the board of airBaltic should immediately call a shareholders' meeting to ensure appointment of a new council. The Cabinet and the Transport Ministry is currently working on a development plan for the carrier. Mr Augulis also stated airBaltic President Bertolt Flick’s role at the national carrier will be discussed at the next airBaltic shareholders’ meeting.

Mr Flick has publicly explained the nature of airBaltic’s operation, which sees it incur losses over the winter period and profits in the summer that offsets the winter losses, a trend he expects will continue to 2011. Nevertheless, the Latvian government stated it plans to find new investors in airBaltic as part of plans to redevelop the airline’s strategy and put it on more secure financial footing. Mr Flick has since stated he has been informed that Kampars and Prime Minister Valdis Dombrovskis have met with potential investors in airBaltic, but are yet to meet with his company Baltic Aviation Systems Ltd. According to Mr Flick, such actions by the government, his joint venture partner, has a detrimental impact on the airline, raising concern among partners and customers and hurts the airline’s brand.

In response, Kampars, urged Mr Flick to attend the next Cabinet meeting, scheduled for 25-Jul-2011, because it is "important for the government to receive complete, grounded and audited information on the airline's financial state as Latvia has invested major sums of money." Shareholders will elect a new council and decide on a possible increase of the airline's share capital at the meeting, the government stated. He also called on Mr Flick to work with the government in addressing the airline’s financial difficulties. He said the Latvian Cabinet is looking at several issues at address the airline’s liquidity issues, including increasing share capital.

Ongoing uncertainty created by government interference works against airBaltic, hurting the airline’s ability to generate profit in the strong summer period. The uncertainty has spread to one of the Baltic region’s largest online airfare websites, Bookinghorse, which has temporarily stopped showing airBaltic fares in response to statements about the company's financial situation. Website's administrator JSC Interneto Partneris also pulled airBaltic offers from Latvia, Lithuania and nine other markets.

Transport Minister Uldis Augulis confirmed that British charter company Ocean Sky Aviation Ltd is the only company to signal an interest in investing in airBaltic. The Latvian Transport Ministry received the offer on 27-Jun-2011 and while no information about the details of the offer have been released, the ministry is reportedly considering it. The Latvian state holds 52.6% of airBaltic shares but plans to drop this to 26%. The government has previously reviewed a proposal from Taurus Asset Management Fund to invest LVL10 million into the carrier however decided the offer was “too vague”.

Vladimir Antonov, a Russian billionaire and co-owner of Convers Group, has assured airBaltic customers that the airline will not collapse. Convers Group owns Latvijas Krajbanka and Lithuania's Snoras Bank and is a major creditor to Baltic Aviation Systems Ltd. Antonov said he knows “who wants to buy airBaltic and who wants to invest money into the airline, one way or another.” He said that Convers Group had not been approached to invest in airBaltic, but added that it would provide debt capital to most parties interested in doing so.

Whatever the outcome, a quick resolution must be the priority for all parties involved. Players including SAS, Finnair, Flybe, Ryanair and Wizz Air are all making key strategic moves in the Baltic and Nordic regions. If the conflict between shareholders is not resolved quickly it will inevitably affect airBaltic’s summer performance, preventing it from generating net income to offset the weak winter result and placing it in an even more precarious position than it otherwise would have been. It will also slow the airline’s ability to respond promptly and aggressively to moves made by rivals, which are eyeing airBaltic and would eagerly move into the airline’s market, where airBaltic has had much success.