European airline shares declined with all major markets globally on Tuesday (23-Nov-2010), as European markets plummeted to a three-week low on concerns about Ireland’s economic and political uncertainty and political tension between North and South Korea.

British Airways (-0.6%) made only a slip for the day, despite raised fears its cabin crew union Unite will launch another strike vote before Christmas after BA suspended a "long-standing" crew member for reportedly launching a Christmas collection for suspended and sacked colleagues. BA stated the staff member was suspended over allegations of bullying and harassment.

Aer Lingus and TUI Travel only companies to gain for session

Aer Lingus (+1.5%) and TUI Travel (+0.5%) were the only carriers to gain for the day. During trading, Aer Lingus announced new routes and increased frequencies on services from Cork and Belfast to Spain and the Canary Islands for summer 2011.

TUI Travel has been gaining over the past few days on continuing hopes parent TUI will launch a bid to acquire the remaining shares in the company once it offloads its stake in shipping firm Hapag-Lloyd HPLG UL. 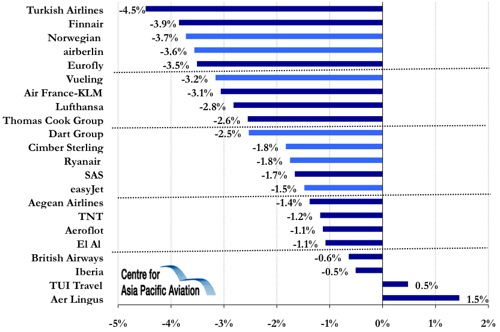