Comair joint CEO, Erik Venter, stated the carrier, which had already ordered eight new B737s to replace older aircraft in its fleet, plans to increase the number of B737s in its fleet to 23 over the next few years.

The carrier has also has also entered a partnership with ATR to provide the first training facilities in South Africa for pilots of these aircraft. ATR Senior VP Customer Services Jean-Pierre Cousserans stated the opening of the new facility was a step forward in the company's regional policy.

Kenya Airways stated a delay in acquiring new aircraft will not affect its expansion plans after the carrier announced aircraft previously due for delivery in Oct-2010 will now not be delivered until 2013 at the earliest.

Middle East shares were mostly on the rise with Royal Jordanian (+5%) and Kuwait National Airways (+1.2%) shares up while Air Arabia (-0.5%) dropped slightly. 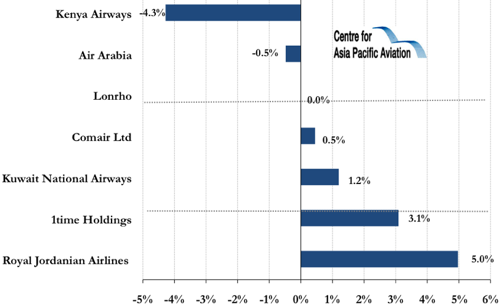