Comair (-0.3%) shares slipped after warning that it does not see any signs of a recovery in the South Africa airline industry.

The carrier now plans to expand operations, launching new routes in “the next few months” to “chip away” market share from South African Airways. Comair has ordered eight new B737-800s, for delivery between 2012 and 2015, to aid the expansion.

DWS Invest Africa LC fund Manager, Jens Schleuniger, told Reuters African stocks are undervalued at present, as markets are overstating Africa’s political risk, and investors should look to buy African shares over Chinese shares as a result. According to Schleuniger, “few know that Africa is the second most dynamic growth region behind Asia. However, there is a lack of trust as many investors attach too much importance to political risks”.

Elsewhere in Africa, Kenya Airways (-2.5%) was also down, as Kenya’s All-Share Index slipped 0.1% on rising political turmoil in the country. 1time Holdings and Lonrho were both flat.

In the Middle East, Jazeera Airways (+3.1%) was the day’s biggest gainer, continuing to rise from the day prior, when it announced it has fully acquired Sahaab Aircraft Leasing Co, a private aircraft leasing firm, for KWD25.6 million.

Air Arabia (+1.1%) was also up, while Kuwait National Airways (-1.8%) was down, despite Kuwait’s share index reporting its eleventh consecutive day of gains. Royal Jordanian Airlines (-1.0%) also ended the day lower. 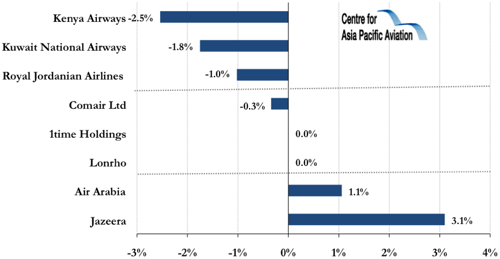