Also during trading, Comair announced the acquisition of a controlling interest in the Holiday Tours' wholesale business, effective 06-Apr-2010. Comair plans to incorporate its advanced technology infrastructure into Holiday Tours, which will assist the trade and real time booking functionality to all its point-to-point destinations.

Elsewhere in Africa, Lonrho subsidiary, Fly540 Zimbabwe, obtained a franchise licence from Fly540 Africa, enabling the carrier to finalise its business development plan for submission to the Civil Aviation Authority of Zimbabwe for an Air Operator’s Certificate. The carrier is now planning to launch service in Jun-2010, although this is dependent on the AOC issuance. The carrier was initially scheduled to launch operations in Sep-2009, which this subsequently shifted to Oct-2009, and then deferred indefinitely, due to the company's failure to obtain its AOC (due to the process to obtain a franchise taking longer-than-expected). The carrier will operate ATR72 aircraft.

In the Middle East, Jazeera Airways (+1.0%) gained, despite the Kuwait Stock Exchange falling 5.5 points. Air Arabia (+0.1%) was up only slightly, while Kuwait National Airways and Royal Jordanian were flat.

Also in the Middle East, Middle East Airlines Chairman, Mohammed Hout, stated the company will commence the process of partial privatisation this year, adding that he expects shares in the carrier to commence trading on the Beirut Stock Exchange by 2011, once the IPO process has been completed. The carrier plans to sell a 25% stake in the company on the market.  The carrier's initial plans to partially privatise the company in 2008 were delayed by the global economic meltdown. MEA, founded in 1945, currently operates a 13 aircraft fleet serving a network of 29 destinations. Two additional aircraft are scheduled for delivery in May-2010. 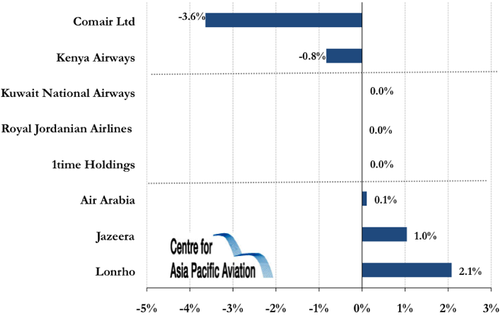