Comair planning to issue up to 69 million new shares

Comair (-10.5%) shares suffered their biggest daily drop in two months, after the carrier reportedly stated it plans to issue up to 69 million new shares at ZAR1.80 each, as part of plans to raise ZAR124.5 million to fund Boeing aircraft orders.

Also in South Africa, 1time Holdings (-4.6%) was also down. The decline was despite a 0.7% rise in South Africa’s JSE All Share Index, which was up on positive economic trade data from China.

Elsewhere in Africa, Lonrho was flat, while Kenya Airways (+4.2%) ended trading up.

In the Middle East, Air Arabia (-1.0%) was down, as was Jazeera Airways (-0.9%), despite a flat Kuwait Stock Exchange.  Kuwait National Airways was flat. Royal Jordanian Airlines (+0.5%) ended trading up slightly, moving with the Amman Stock Exchange (+0.4%). 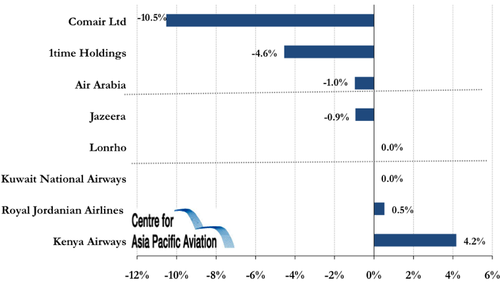