Comair only gainer of the day; 1time and Royal Jordanian down with markets

The majority of African and Middle Eastern carriers’ shares were down on Friday (16-Apr-2010), with Comair (+2.3%) the only carrier to make gains, after finalising plans on Thursday to open its rights offer on 03-May-2010.

Kenya Airways (-0.8%) was also down. The carrier was reportedly losing approximately USD999,000 per day over the weekend after being forced to cancel flights to and from Europe (Amsterdam, London and Paris) due to the continued closure of European airspace, as volcanic ash continued to threaten the safety of airline operations. See related reports: 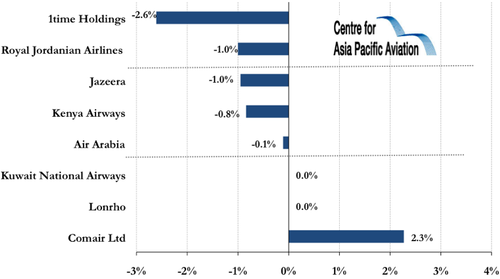