Global airport passenger traffic in Dec-2009 showed "clear signs” of renewed passenger traffic demand at many airports worldwide, according to Airports Council International (ACI), with a “surge” in both passenger and freight traffic worldwide (albeit off a low base in 2008).

ACI World Director of Economics, Andreas Schimm commented, “looking at full year 2009, global traffic results were much better than expected earlier in the year, finishing at just 2.6% below 2008”. He added that “fears that third quarter traffic would decline substantially did not materialise”, commenting that the “stabilisation seen provided a platform for remarkable fourth quarter growth”.

Passenger growth across the board in Dec-2009

According to ACI, passenger traffic continued the improvement trend in Dec-2009, with an increase of 5.3% in total global traffic. 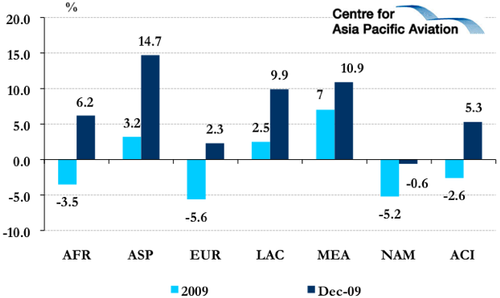 In the full year, ACI commented that traffic results highlight a split between the two largest aviation markets (North America and Europe), each of which reported traffic reductions of more than 5%, and the continued expansion of Asia Pacific, Latin America-Caribbean and Middle East markets.

Top performance results in the international category were seen at Dubai (+9.6%), Kuala Lumpur (+8.8%) and Istanbul (+7.3%), the only airports with more than 10 million passengers p/a to register growth in 2009.

Airports in Africa suffered a moderate 3.5% setback for the year, mainly caused by declines in domestic traffic whereas international shrank only marginally.

According to ACI, freight results for Nov-2009 and Dec-2009 were “remarkably strong...balancing the severe losses sustained in the first quarter 2009 and narrowing the gap with performance in 2008". The results illustrate mounting confidence in the global economic recovery and significant pent-up demand, according to ACI.

During the month, ACI reported double-digit freight growth across the board, with a 27.9% increase in international freight, outpacing the 15.3% growth in domestic freight. Total freight traffic increased 23.3% year-on-year. 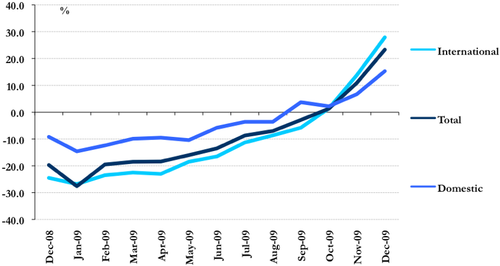 Positive freight growth developments were seen in all regions, except for domestic Latin America-Caribbean domestic traffic (which was down 6.4% in the domestic market), with double-digit growth in every region except domestic Europe (+6.3%) and total Latin America freight (+8.9%).

For the full year, freight traffic fell below the 2008 performance (-8% worldwide; - 2.8% domestic; -10.3% international), with ACI commenting that it remains “too early to consider this performance as a future indicator of a sustainable economic recovery as this rebound is of a more technical than fundamental nature”. 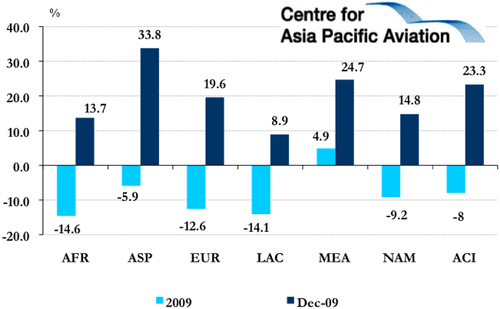 Like ACI, IATA reported a sharp increase in demand for air transport at the end of 2009, as the upturn in economic growth – particularly in Asia – gathered pace (the year-on-year comparisons are however disported by the collapse in demand at the end of 2008). IATA added that freight volumes rose at a “robust” pace in 4Q2009, compared to 3Q2009 levels, with air travel also rising, but lagging behind the upturn in airfreight. 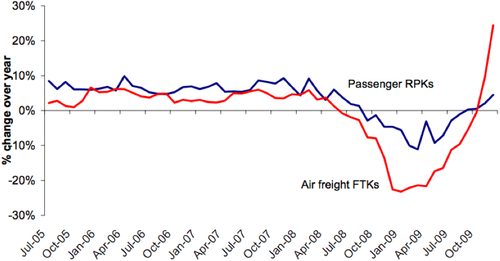 However, IATA noted that while there has been strong upturn in air travel and airfreight demand at the end of 2009, capacity cuts remain in place, indicating the “smaller fluctuations in airline capacity compared with the volatility in demand”. IATA added that air freight capacity had started to rise, but at a much slower pace than the surge in demand. 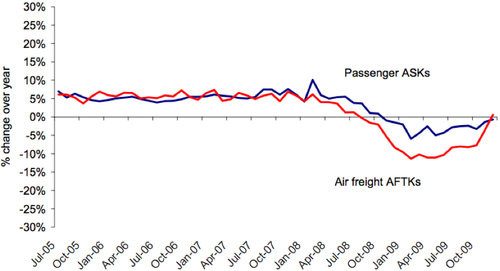