Elsewhere, Thai Airways' shares climbed 4.6%, and hit the highest level since 10-Jul-09 during the day’s trading, amid expectations that the airline would report a net profit for 2009, after a net loss in 2008, due to lower jet fuel costs and cost cuts.

Leading the decliners on Tuesday was Jazeera Airways, down 3.6%, Japan Airlines (-1.8%) and Singapore Airlines (-0.6%). Malaysia Airlines shares remained stable on Tuesday, despite news that the carrier’s passenger traffic has returned to pre-global financial downturn levels. Load factors increased to 67% in Jun-2009 and 76% in Jul-2009, after dropping to 56% in 1Q2009. The carrier attributed the increase in traffic to its various initiatives, including its “Everyday Low Fares” programme. 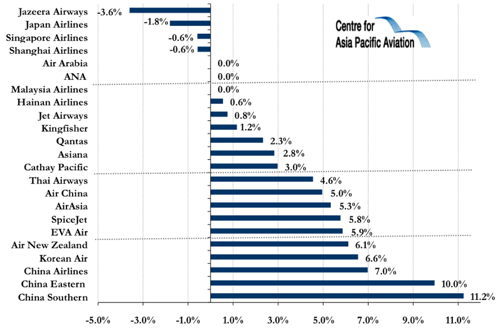