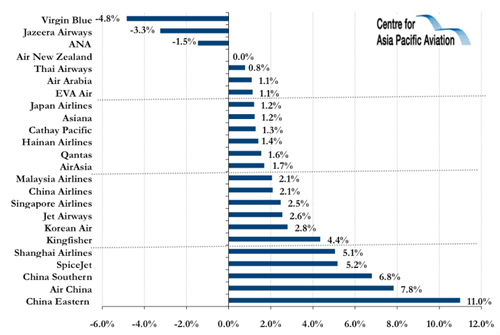 Air China’s shares gained the most in six weeks in Hong Kong, after the carrier stated it expects “not less than 50% growth” in its 2009 interim results, due to the implementation of State industry support policies, the reduction in fuel costs and negative fair value from fuel hedging contracts and “stable growth” in the domestic air passenger market.

Supporting this statement, the carrier reported a 13.1% increase in passenger numbers in Jun-2009, driven by strong domestic growth (of 18.1%; NB: off last year's weak base), with overall load factors improving 0.8 ppts to 73.4%. Cargo volume, however, was down, by 2.8 ppts, although domestic cargo was up by 3.7%. 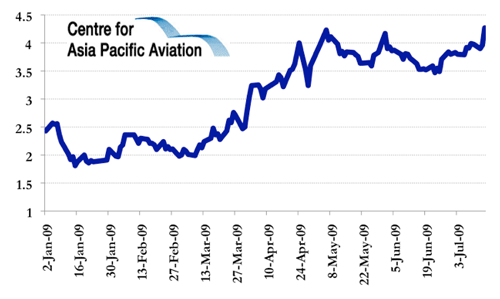 Singapore Airlines meanwhile stated “aggressive competition” has led to yield pressure in recent months, with the carrier also reporting “soft” traffic results for Jun-2009.  The carrier’s share price, however, gained 2.5% on Wednesday. According to JP Morgan, most Asia Pacific airline share prices, including Singapore Airlines, will experience a pricing recovery over the next 12 months.