The benchmark Shanghai Composite Index slumped 5.2% – its biggest one-day fall in 14 months – as China's consumer price index rose by 4.4% in Oct-2010, stoking expectations of another tightening of monetary policy, which could dampen demand. Sensitive sectors such as airlines were hard hit. Shandong Airlines shed 10% and Hainan Airlines 8.3%, while the "big three" state-owned carriers all slumped around 5%.

Skymark fell 1% as the airline stated it plans to order nine more A380s, in addition to an MoU for four A380s signed with Airbus in Friday.

Qantas slipped 2.4% as the carrier confirmed its A380 fleet would remain grounded for at least a further 48 hours. Thai Airways dropped 2.1% as it revealed a worse-than-expected third-quarter net profit. 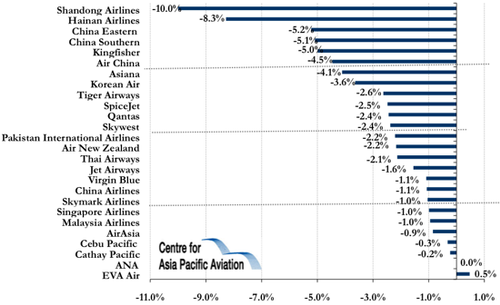