Shares in mainland Chinese carriers soared on Friday as trading resumed after a week-long National Day holiday. China Southern, Hainan Airlines, Air China and China Eastern were all stronger on Friday, with the airlines continuing to benefit from a rising yuan as it lowers the value of their dollar-denominated debt, boosting income.

China’s stocks have gained the most in four months after Moody’s Investors Service put the nation’s debt rating on review for a possible upgrade, with retail sales surging and the yuan climbing to its strongest against the dollar since 1993.

Also in the North Asia market, shares in Korean Air and Asiana Airlines were weaker on Friday, declining 4.7% and 1.5%, respectively, reflecting overall weakness of Korean stocks, which closed 0.2% lower as foreign investors and institutions cashed in on recent gains. Airlines and shipping companies, particularly, lost ground after enjoying strong gains in recent sessions. 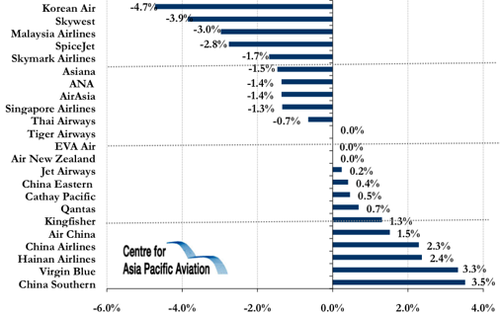