RBS estimates China Eastern’s overall yield contracted by 12% in 1Q09 – worse than forecast - due mostly to weak traffic on international routes and discounting in the domestic market.

Air China and China Southern gained 11.1% and 10.2% yesterday, respectively, clawing back half of this week’s losses. Nomura Holdings raised its rating on Cathay Pacific from “neutral” to “buy”, noting the company is set for a “better year”. It added the impact of increased services between Taiwan and the Mainland had been factored into Cathay’s shares (which rose 5.6% yesterday).

Japan Airlines’ shares dipped as the carrier warned of a wider-than-expected net loss last financial year, but the stock recovered to close up 0.4%.

Qantas and Virgin Blue enjoyed a mild bounce in their share prices yesterday, rising 3.2% and 1.9%, respectively, after two days of falls, although Qantas' yield figures for March - published today - are very weak.

New Zealand has three confirmed cases of swine flu, according to the WHO, and several more under investigation. Air New Zealand was one of only two airlines to decline yesterday, with its shares easing 1.8% after Tuesday’s 0.9% increase and Monday’s 2.7% fall. 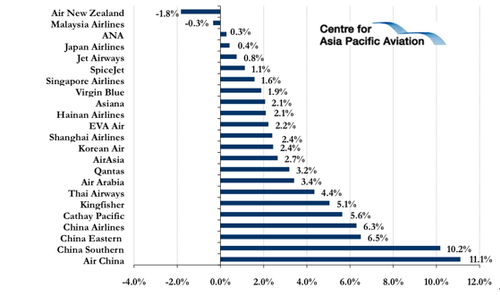