The strength of the Chinese economy and the continued growth of domestic passenger numbers has helped traffic results and share prices for several of China’s major airports over the past few weeks.

Hainan Meilan International Airport, which traded up 1.9% on Wednesday, reported its 1H2009 results, stating that while uncertainty remains for the international economy, stimulus programmes are ensuring steady growth in China.

Earnings were down somewhat on last year, with revenue declining 1.3%, as the airport cut fees and charges and non-aeronautical revenues saw a 4.1% decline. However, the airport has also been able to effectively cut costs, slashing 11% from its operating expenses to generate a USD17.2 million operating profit, a 3.4% increase.

Looking ahead into 2H2009, the airport expects international traffic will show “slim” improvement 2H2009, while domestic traffic will remain stable. The airport has promised to show “great flexibility” to cooperate with airlines to ensure that more new routes are opened up in the second half of the year.

Encouragingly, Auckland's international traffic is recovering from the year’s earlier lows and international aircraft movements were up 6.9% in July, suggesting that international carriers are willing to commit more capacity to the airport. 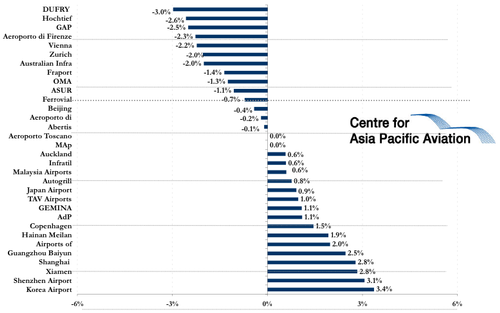