CAAC reports Mainland Chinese airlines handled 211 million passengers in the 11 months ended Nov-2009, a 20% year-on-year increase. The annual figure will therefore exceed 200 million for the first time. Cargo volumes were up 5.7% in the 12-month period, with international cargo up 0.2%, reversing the negative growth in the first ten months of the year. 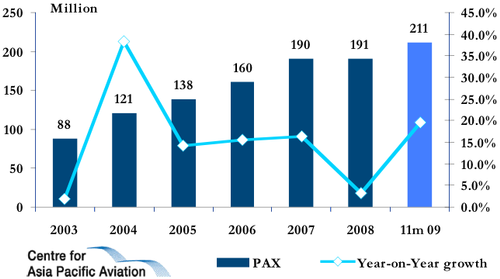 Meanwhile, total industry profits (including airlines and airports) for the 11-month period was USD1.7 billion, with a profit of USD170 million in Nov-2009 alone.

Qantas' shares gained the most in almost two weeks, after the carrier announced plans to increase fares on select international routes from 18-Dec-2009, for its first fare increase since Jun-2008 (the carrier has already increased domestic fares by 5-10%). The carrier was subsequently raised from ‘neutral’ to ‘buy’ by Bank of American Merrill Lynch, citing improving passenger yields.

Malaysia Airlines expects recovery towards the end of 2010; no plans to increase fares

Meanwhile, Malaysia Airlines Network and Revenue Senior General Manager, Dr Amin Khan, stated he expects a “real recovery only towards end-2010”, adding that “you’ll never see airfares dropping to such low levels again”. Dr Khan added that the carrier has no plans at present to increase fares, as it is still cautious of an economic recovery. Shares in the airline gained 2.3% yesterday. 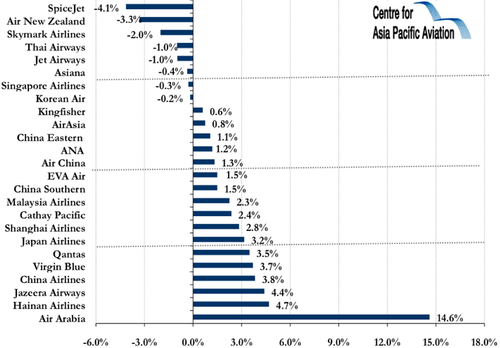 Pax, load factors and cargo volume up at Thai Airways in Oct-2009

JAL and ANA shares up on US-Japan open skies agreement

Shares in Japan Airlines rose for the first time in a week, gaining 3.2% yesterday, with shares in ANA up 1.2%, after the US and Japan reached agreement on the text of a landmark open skies aviation agreement on 12-Dec-2009, liberalising US-Japan air services for the carriers of both countries and opening up the possibility for stronger alliance between Japanese and US airlines.