China’s airlines are currently preparing for the largest National Day Holiday in the country’s history, with an estimated 200 million people expected to travel during the eight-day holiday period, up 13% year-on-year, according to the National Tourism Administration.

China Southern is optimistic ahead of the holiday period (which commences on 01-Oct-2009) and has added 1,135 flights to its schedule to match expected demand. The carrier stated it is expecting a surge in domestic travel, with international travel also popular, with international destinations, including Dubai, Tokyo, Osaka and Incheon, expected to experience load factors of 85% over the holiday period.

China Southern's shares gained 4.0% yesterday, following an upgrade from Goldman Sachs, from ‘neutral’ to ‘buy’. The carrier’s share price target (in Hong Kong) was also upgraded from HKD1.89 to HKD3.00 per share. 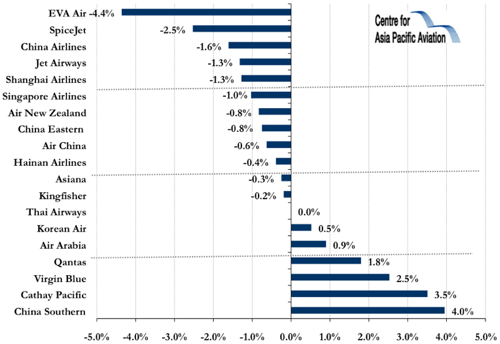