Shares in China Southern gained 0.8% yesterday in Hong Kong trading, despite the broader marking falling 0.2%, as the carrier stated it expects to report double-digit growth in passenger and cargo volumes in 2010.

The carrier is also set to benefit from a rising Chinese Yuan, as its US dollar dominated debts account for 89.5% of total debt. CEO, Xu Jiebo, added that if the Yuan rises by 1%, it could record CNY500 million of exchange gains.

CEO, Xu Jiebo, also stated he believes there is "room for raising ticket prices” in 2010, adding the carrier plans to seek cooperation with international and domestic airlines to develop its air cargo business. Hong Kong-listed shares in China Southern have risen 59% so far in 2010, outperforming a 29% gain experienced by Air China. Shares in China Eastern and Air China slipped 4.6% and 2.9% respectively yesterday. 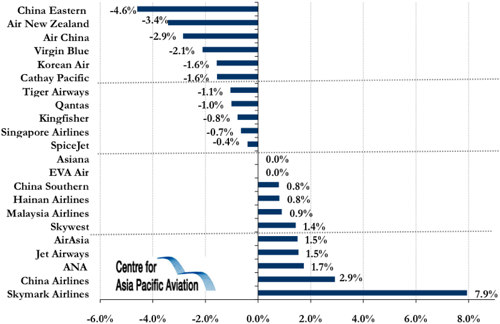