China Southern Airlines’ shares soared 9.4% as the carrier stated it is confident of recording an improvement in performance in 2009 after unveiling a USD703 million net loss for 2008 – its first annual loss since 2005. 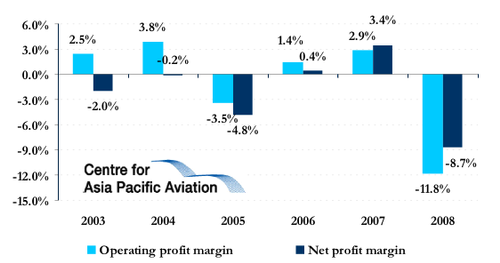 China Southern stated lower fuel prices, government support for the national airline sector and China’s expanding economy would bolster the domestic market, but it conceded the outlook remains challenging. Earlier this week, the CAAC stated China’s aviation industry could return to profit this year after a very difficult 2008.

Meanwhile, Qantas shares gained 2% yesterday despite the carrier revealing yields have collapsed, it is currently making losses and the outlook remains bleak as Australia enters recession. Investors took heart that the airline plans to cut up to 1,700 positions, defer A380/B787 deliveries, sell older aircraft and reduce Group capacity by -3% in FY2009/10 (against a previous plan to grow by 2%).

RBS Equities switched its rating on the stock from Hold to Sell, stating “we don't think today's rally can be sustained in the face of expected consensus earnings downgrades and in what is clearly still a very tough operating environment”. 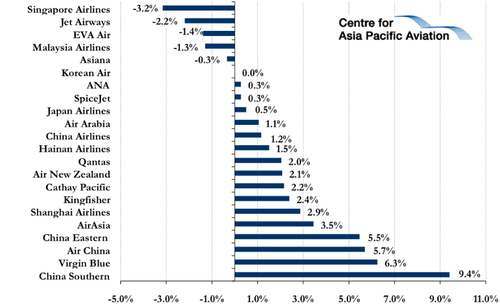