China Southern reported a large improvement in the six months ended 30-Jun-2010, with net profits of USD303.2 million compared with USD3.7 million in 1H2009. Operating profits increased 29.3% in the period, to USD259.4 million, with the carrier benefitting from surging travel demand and the sale of a stake in a maintenance venture.

Upon the release of the results, the carrier stated:  “Looking into the second half of 2010, benefitting from steady growth in the domestic economy and optimal adjustment to economic structures, the aviation market will remain a sound momentum for rapid growth, while the improvement in national income, supported by a stimulus plan promulgated by the state, shall continue to lay a solid foundation for the aviation industry."

The carrier, however cautioned: “We are also aware of the fact that the global economic recovery falters, and the domestic economy, affected by structure adjustment and implementation of macroeconomic control policies, may slow down. The company also faces a new challenge from the operation of high-speed railways."

Shares in the carrier gained 0.8% to HKD3.85 in Hong Kong yesterday. The shares have climbed 59% in 2010, outpacing a 45% gain for Air China and a 56% increase for China Eastern. Air China and China Eastern are due to report earnings later in the month.

In other China news, CAAC reported that the nation’s airlines reported a combined profit of USD808 million in Jul-2010, contributing 85% of the industry profit of USD948.8 million, which represented growth of 363.5% year-on-year increase. Airports contributed USD76.1 million to the result, with "other" industry companies contributing USD64.4 million.

Meanwhile, passenger numbers increased 21.0% in the month to 25.5 million, at an average load factor of 83.6% (+6.8 ppts), while cargo volumes were also up, increasing 23.6% year-on-year to 4.8 tonne kilometres, while aircraft utilisation increased by 0.2 hours to 9.8 hours.  Both the passenger and cargo figures represented new records.

Malyasia Airlines swung to a net of USD167.8 million loss in the second quarter (compared with a profit of USD275.4 million in 2Q2009) as earnings were negatively effected by higher fuel spending (+44.2% to USD347 million) and fuel hedging losses, prompting CEO, Azmil Zahruddin, to comment: "The volatility of the fuel price remains a key challenge for the industry."

The carrier reported a USD89.8 million operating loss in the period, although this represented an improvement on a loss of USD133.8 milion in the previous corresponding period, with the carrier expecting a profitable result in the full year. Also in the three-month period, operating revenues increased 26% to USD1,006 million, with a 17.7% increase in operating costs (to USD1,100 million).

Announcing the results, the carrier stated: "Given that passenger load factor has recovered to the pre-crisis level, the focus for second half of 2010 shifts to strengthening yield and intensifying fuel cost mitigating initiatives."

Meanwhile, Thai Airways reported a better-than-expected second-quarter net profit of USD48.8 million in the three months ended Jun-2010, a notable turnaround from a USD169.8 million net loss in 2Q2009, as foreign exchange gains helped to offset lower passenger numbers and load factors (-1.6 ppts to 64.6%) related to anti-Government protest in Bangkok over the Mar-2010 to May-2010 period. 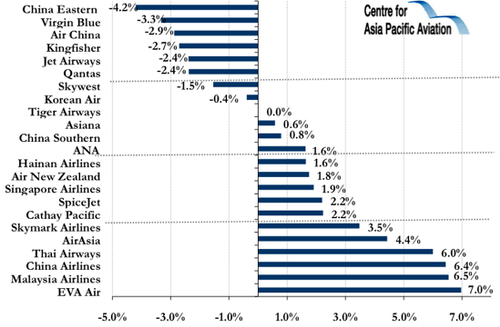