China Southern Airlines confirmed yesterday that it was likely to receive a CNY1.5 billion (USD219 million) capital injection from its state-owned parent company funded by the Chinese Ministry of Finance, to "support the development of the airline's core business”.

The funds will help China Southern reduce its debt-assets ratio. Shares in the carrier surged 4.9% yesterday before being placed in a trading halt.

Malaysia Airlines (MAS) is entering a rapid fleet and network growth phase, emboldened by fresh funding support under a well-supported rights issue and a return to profitability (albeit slight) in 4Q2009. Investors liked the result, sending MAS’s shares up over 5% yesterday.

Australian regional operator Skywest Airlines (whose parent is headquartered in Singapore) reported a pre-tax profit for the six months to ended 31-Dec-2010 of SGD10.1 million (USD7.2 million) against the previous SGD2.5 million loss, as revenue rose 10% to SGD107.1 million. Unlike Qantas, Skywest declared an interim dividend of SGD0.005.

Chairman, Jeff Chatfield, stated the result “demonstrates the importance of maintaining the business strategy of providing an excellent airline service to the coastal towns of Western Australia combined with scheduled charter for the worlds major mining and resource companies”.

Shares in the Sydney and London-listed Skywest surged 32.6% yesterday. 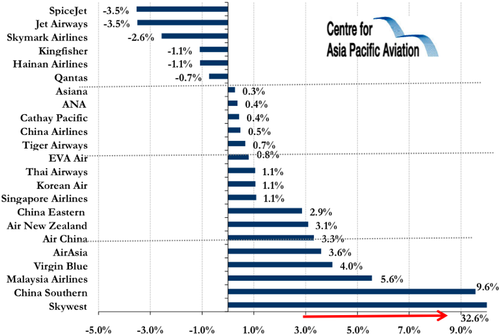