Shares in China Southern Airlines will resume trading today (09-Mar-2010) following the announcement that the carrier plans to raise USD1.57 billion in funds through the non-public issuance of A Shares and H Shares, as part of efforts to reduce the company's gearing ratio, improve its capital structure and enhance its ability to mitigate risk.

Meanwhile, Air China (shares currently on trading halt) has been rated by JPMorgan Chase and Co as a "top pick" among Chinese stocks, with the company stating it expects shares in Chinese airlines, banks and insurers to rally as the government promotes a shift from investment to a consumer-driven economy.

In India, Jet Airways shares gained 2.5% yesterday. There are reports in the Economic Times that the carrier plans to abandon its USD200 million fund raising proposal (to have been conducted through a qualified institution placement) in the current fiscal year (12 months to Mar-2010).

The decision reportedly relates to concerns by the company’s majority owner, Naresh Goyal, about the dilution of his stake (under the proposed plan, Mr Goyal’s stake would be reduced from approximately 80% to 66%).

Meanwhile, the Philippines' Cebu Pacific reportedly plans to follow in the footsteps of Tiger Airways and dust off its IPO plans this year. The LCC aims to raise approximately PHP12 billion (USD262 million) through the issue of 125.3 million new common shares (with a par value of PHP1.00/share) on the Philippine Stock Exchange.

The carrier also plans to sell 110.3 million shares for the same price, and 35.5 million shares owned by parent, JG Summit Holdings, Inc. 18.4 million additional shares will also be listed under the carrier’s employee stock option plan, at a 25% discount. Shares are to primarily be offered to foreign institutional investors, due to the size of the sale. Cebu Pacific had originally planned to launch an IPO in 2008, but suspended plans due to volatile markets.

Garuda Indonesia is also planning an IPO, probably in 3Q2010, while China's Juneyao Airlines is also considering a public listing. 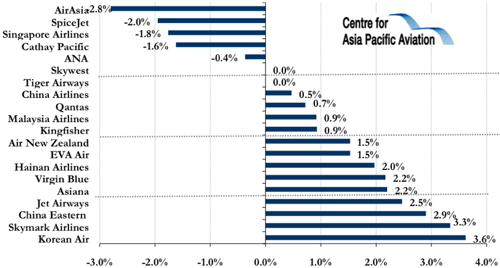