Shares in Chinese airlines fell back in Hong Kong trading yesterday, with China Eastern slipping 3.8% and China Southern and Air China down by 3.4% and 2.4%, respectively. Sentiment was affected by higher oil prices, coupled with strong official remarks that the Yuan-dollar peg is to be maintained for now.

Meanwhile, China Southern Airlines was downgraded by Macquarie from “outperform” to “neutral”.

Also in North Asia, shares in South Korea’s Asiana Airlines gained 3.0% yesterday, while Korean Air’s share price gained 0.3%, as the latter reported a return to profitability in 1Q2010, with an operating profit of USD198 million and a profit before tax of USD203 million. 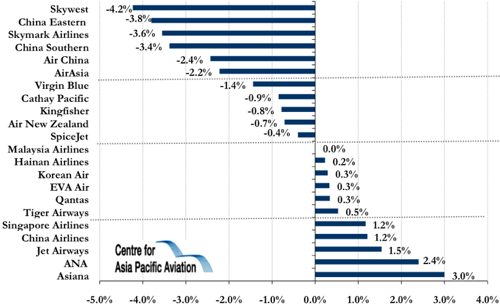