China Southern Airlines’ shares soared 7.1% in Hong Kong to their highest level since Jun-2008 (as trading resumed after a two-week suspension), following the carrier's announcement of a much bigger than expected capital raising plan – supported by Beijing – to help it improve its balance sheet. Clearly a return to profitability in 2009 and soaring rates of traffic growth in 2010 were not enough. Beijing is again dipping deeply into its pockets to support the “big three” airlines following a flawed industry consolidation programme and massive debt-fuelled expansion last decade, as well as natural disasters and wrong-way bets on derivatives in 2008 and the global economic morass of 2009.

Restoring some balance to the balance sheet

China Southern has announced plans to issue around 1.8 billion new A-shares at RMB5.66 per share and 312.5 million new H-shares at HKD2.73 per share, to raise approximately USD1.57 billion. The A-shares are to be placed with no more than ten specific investors, including its parent, China Southern Air Holdings Company (CSAHC), while the H-shares are to be placed solely with CSAHC.

China Southern will use the proceeds to pay off up to 30 maturing bank loans, totaling USD1.35 billion. As at 30-Jun-2009, China Southern had USD8.8 billion of net debt – some 7.2 times its total equity.

In Feb-2010, Beijing announced a USD220 million capital injection into CSAHC, as part of another industry support package that also included funds for Air China and China Eastern. Air China is still contemplating how to use the funds (its shares are suspended), but is expected to announce a similar range of measures to China Southern later this week. China Eastern meanwhile intends to announce its global alliances strategy next month and is currently pursuing a strategic partner (reportedly not Singapore Airlines), after receiving generous government support last year.

RBS stated China Southern’s move “should significantly reduce gearing and enhance book value, despite mild EPS dilution” and now forecasts a lower gearing of 218% for FY2010 (vs 492% previously). RBS also upgraded its earnings estimates by 6.6% for FY2010 and 21% for FY2011 “to reflect the benefits from interest-cost savings and the better-than-expected cargo traffic”. RBS upgraded its target price to HKD4.05 and reiterated its “Buy” rating.

HSBC Securities raised its rating on China Southern from “underweight” to “overweight”.

Beijing is clearly keen to improve the balance sheets of its big three airlines, as the Chinese economy gets back into stride in 2010. But it is not good news for rival private airlines – and it will probably not help the "big three" over the long run. As Beijing sends around the rescue boat every few years, the state-owned carriers lack any real incentive to become efficient. 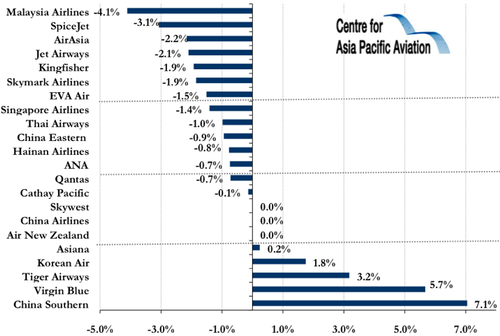