Shares in China Southern advanced 6.8% on Monday (29-Jun-09), despite an unwelcome 22% increase in local jet fuel rates on 29-Jun-09, the second increase in as many months. NYMEX and Brent oil prices jumped on Monday, exceeding USD70/barrel, as prices continue to rebound from the Feb-2009 lows of around USD30/barrel.

Qantas shares were also down yesterday, by 0.5%. Qantas Group today released its May-2009 traffic figures, with the Group reporting very concerning domestic and international yield reductions in May-2009.

In other traffic news, Thai Airways’ passenger numbers slumped 17.1% in May-2009, with cargo volume down 19.0% and load factors slipping a frightening 15.3 ppts. Load factor on services to Australia slumped the most, down 22.0 ppts to 59.0%, with only domestic load factors showing year-on-year improvements (+1.0 ppts to 73.0%). The carrier’s share price was down 2.1% on 29-Jun-09, but remains in a stronger position than at the beginning of the year. 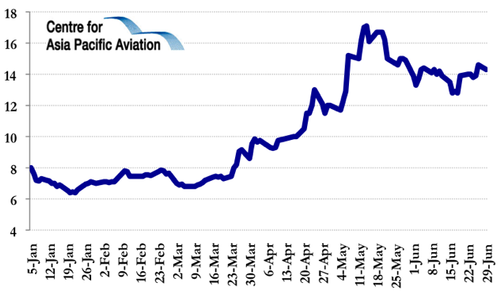 Elsewhere, Cathay Pacific and Singapore Airlines shares rose by 1.2% and 1.3%, respectively. Shares in Malaysia Airlines fell 4.4%, reflecting overall reductions in local stock indexes on Monday, with Japan Airlines and AirAsia also down, by 2.1% and 1.7%, respectively. 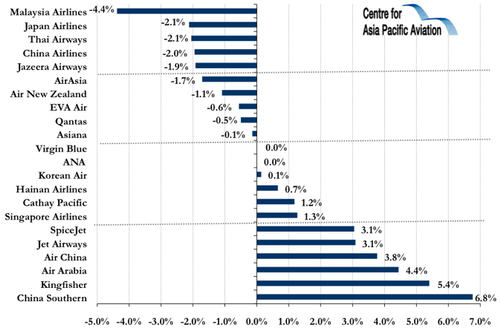