China's passenger growth increased at a rate of 7.5% year-on-year in Oct-2011, according to CAAC data, marking the fifth consecutive month of single-digit growth and a slowdown from Sep-2011's 9.5% increase. Aug-2011’s growth rate of just 4.5% was the slowest pace of expansion since Sep-2008 and there have been only two months of double-digit passenger growth this year. Passenger traffic in China has grown by an average 15.3% p/a over the past decade, or around three times the world average for the same period. So 2011 is definitely a below par performance.

Cargo volumes have declined on a year-on-year basis in six of the ten reported months of 2011. Domestic cargo volumes remained virtually unchanged (-0.2% year-on-year) from Oct-2010 levels, but double-digit freight reductions were seen on regional (Hong Kong/Macau/Taiwan) and international routes, of 15.6% and 17.3%, respectively, in Oct-2011. 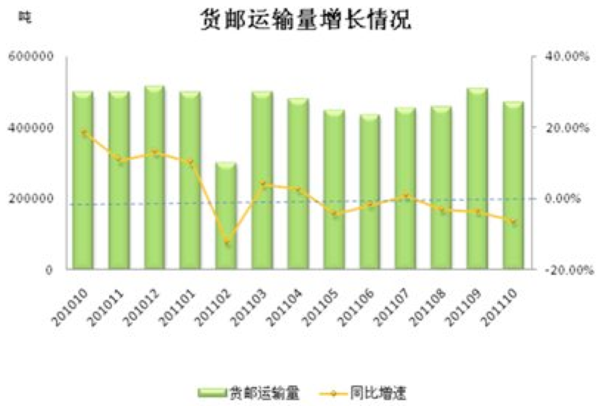 While noting that passenger traffic has seen “steady growth” in the month, CAAC data revealed international routes are performing better than domestic and regional sectors. Over the past two years, this has generally been the case in all but a few months. 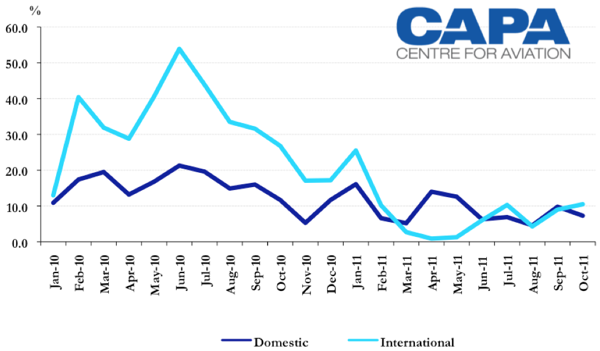 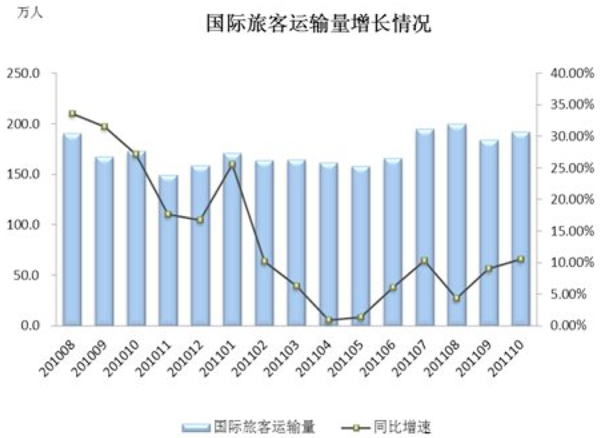 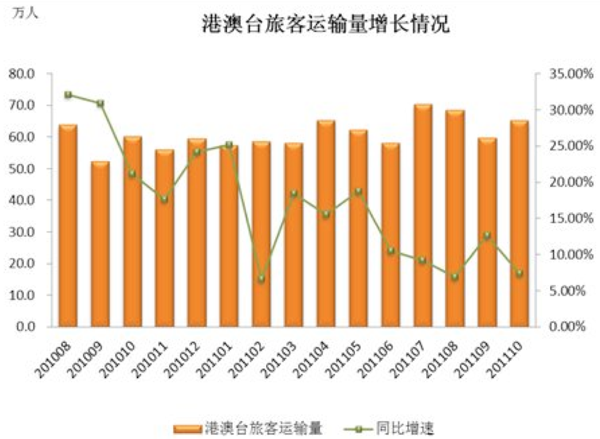 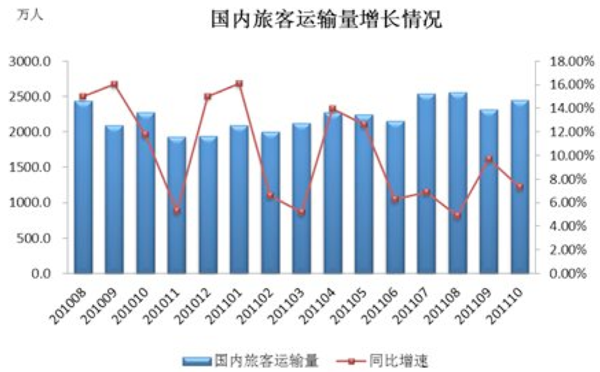 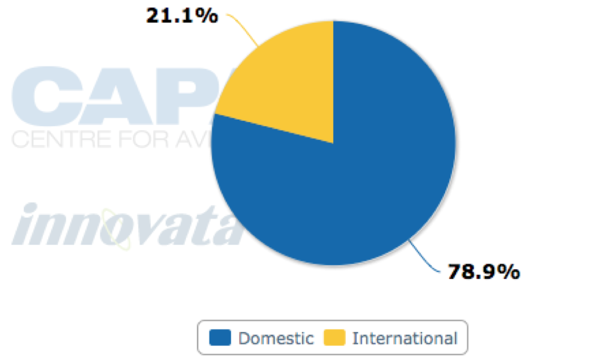 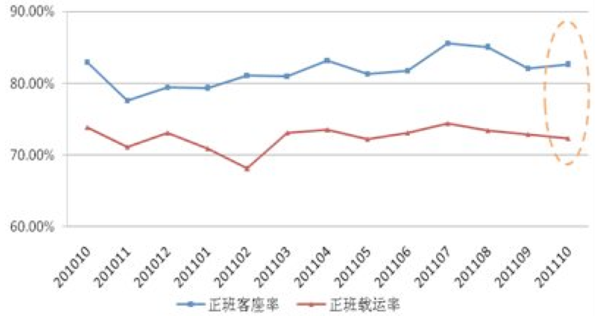 IATA, upon the release of its Oct-2011 traffic, stated Chinese domestic load factors stood at 83.1%. This marked an 8 ppt increase in load factor levels achieved only three years ago, and “has played an important role in improving the profitability of Chinese airlines”, IATA said.

China is the second largest domestic market after the US. As noted by IATA in its traffic statistics for Oct-2011, domestic traffic (RPKs) in China increased at a rate of 8.4% in Oct-2011, down from 9.7% in Sep-2011. This traffic increase was "slightly below the capacity expansion of 8.8%," IATA said. 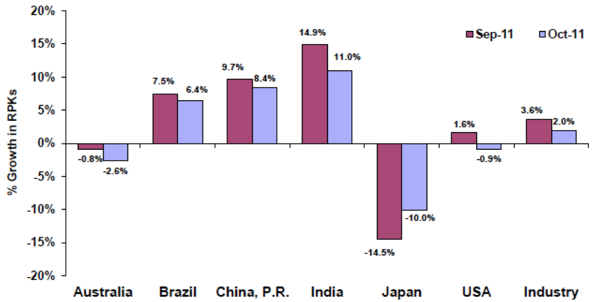 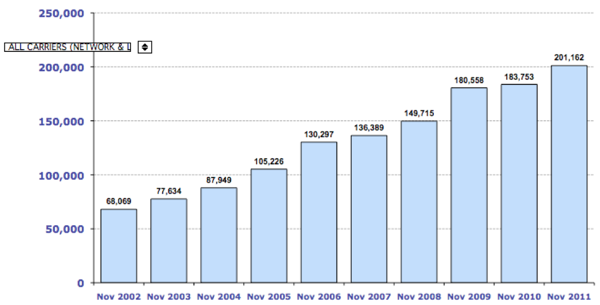 Amid deteriorating global economic conditions, the CAAC in Oct-2011 cut its official air traffic forecast for 2011. China's passenger growth forecast was cut from 13% to 8% this year to 288 million passengers – 13.4 million fewer passengers than previously anticipated – but up from 267 million last year. The air cargo growth forecast was dramatically slashed from growth of 11.5% to flat in 2011, a repeat of 2008 when world economic growth faltered. China's airlines are now expected to handle 5.6 million tonnes of airfreight, against 6.4 million tonnes forecast previously.

But China's long-term growth forecasts remain unchanged, with 450 million passengers still expected by 2015, despite the impact of high-speed rail.

2010 was clearly a banner year of recovery after the downturn in 2008/09, but 2011's volumes have been well below expectation, particularly since the middle of the year. 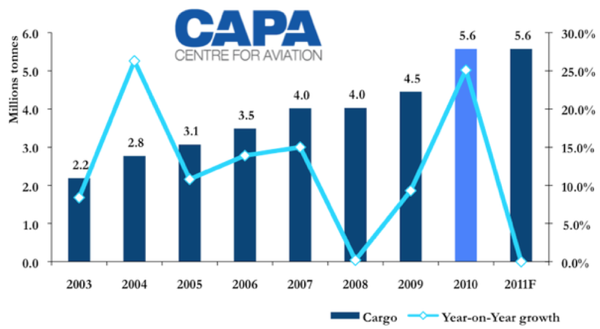 As noted by OAG FACTS this month, China continues to exhibit stronger growth than the global average, as has been the case for some time. China’s largest carriers – China Southern, China Eastern, Air China, Xiamen Airlines, Shenzhen Airlines and Hainan Airlines – have all shown growth in departures domestically and internationally year-on-year in Nov-2011 - and this trend is likely to continue well into 2012. But whether load factors, yields - and therefore profitability - hold up is a different question. 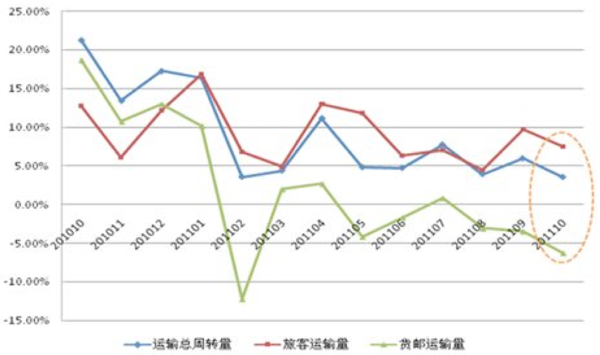