China’s Finance Ministry raised the import tariff for fuel oil from 1% to 3% for 2010 and jet fuel from 1% to 6%, in a move set to curb imports and rising costs for airlines.

The higher tariff on jet fuel is expected to have a limited impact, as most of China's jet fuel imports are under tax-bond schemes to supply international airlines. However, the move will increase operating costs for domestic airlines, which pay for their fuel supplies partly based on the cost of imports.

Meanwhile, the opposite was the case in India, with shares in India’s listed airlines, SpiceJet, Kingfisher Airlines and Jet Airways gaining yesterday, up 7.2%, 2.8% and 0.8%, respectively, after state-run oil companies reduced jet fuel prices for the second time this month, by 1.6%.

Among the region’s LCCs, Tiger Airways Holdings, 49%-owned by Singapore Airlines, is reportedly expected to raise approximately SGD200-250 million (USD143-179 million) in its IPO, according to a pre-marketing document - much less than an earlier estimate of approximately SGD300 million (USD215 million), due to reports of a lukewarm response by investors.

The LCC may reportedly lodge offer filings with the Singapore stock exchange as early as 21-Dec-2009.

Tiger is expected to base its share sale on financial forecasts that include reporting a net profit of approximately USD44 million in the 12 months to Mar-2011, and then USD57 million in the following year. The initial share sale will value the carrier at between USD519 million and USD651 million, according to the pre-marketing document.

Qantas ownership restrictions to be eased

Qantas’ shares were down 0.4% yesterday. As part of the Aviation White Paper, the Australian Government stated it would relax some ownership restrictions on the carrier, removing a 25% restriction on individual foreign investors in Qantas and eliminating a 35% cap for total foreign airline holdings (while maintaining a 49% cap on foreign ownership). The decision will “increase Qantas' ability to compete for capital and to take opportunities to form strategic partnerships in an increasingly globalised industry," according to Transport Minister, Anthony Albanese. 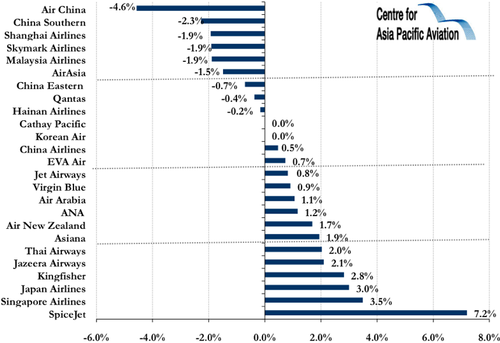