China Eastern shares zoom as it seeks yet more government cash. Getting closer to China Southern?

China Eastern reiterated it is seeking a fresh government injection and “other means to raise capital”, but added it has no plans at present to invite strategic investors. The carrier needs further funding to support its burgeoning capital investment plans (USD1.68 billion in 2010, up 53% on 2009 levels) and to lower its debt-to-equity ratio to around 70%.

The news flow has been positive for China Eastern lately. It agreed to join the SkyTeam Alliance last week and this week unveiled a profit turnaround in 2009 and the first quarter of 2010 (albeit thanks to previous generous government support).

The airline’s move to join SkyTeam (of which China Southern is already a member) and effectively close off the foreign strategic partner channel in favour of government support and “other means” suggests closer ties with China Southern. Beijing supports further consolidation of the domestic industry, with references to the “three pillars” policy abandoned in recent years.

The Shanghai-based carrier’s Chairman, Luo Shaoyang was a former Chairman of China Southern and has previously flagged further cooperation with the Guangzhou-based carrier. The two could provide an effective foil to the Air China-Cathay Pacific combination. Air China has also scooped up several domestic rivals recently, including Shenzhen Airlines. 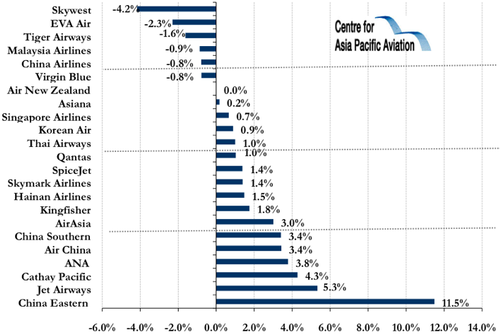