China Eastern Airlines’ shares were up 0.4% yesterday, upon the release of the carrier’s Sep-2009 traffic results.

The carrier reported a 19% increase in passenger numbers, driven by double-digit domestic growth, while load factors were down marginally, by 0.8 ppts to 70.1%. Cargo volume was also up by double digits (+25%), once again driven by strong domestic demand.

Qantas’ shares were down 0.3% yesterday. The carrier plans to increase its stake in Vietnam venture Jetstar Pacific from 27% to 30% by 2010. According to Jetstar CEO, Bruce Buchanan, Jetstar Pacific has increased its load factor from less than 80% when it took over the carrier's operations, to 85%. 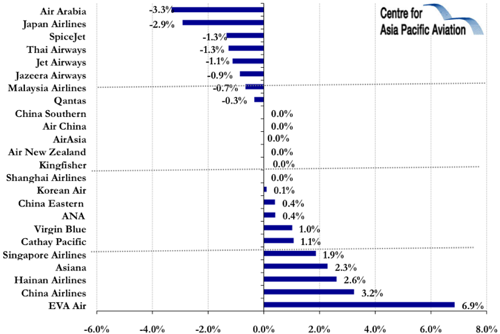