China Eastern Airlines shares slumped 5.6% on 20-Jan-09 after UBS cut its price target on the stock from CNY2.50 to CNY2.00 and reiterating its "sell" rating. China Eastern is not the only carrier set to struggle this year. UBS predicts a 25% reduction in revenues in 1H09 across Asia's airlines.

UBS also changed its rating on China Southern Airlines (-2.3%) from "buy" to "sell". Shanghai Airlines shares rose 7.6% as it issued a profit warning, predicting a doubling of annual losses last year. This heightened investor speculation the carrier could be merged or acquired by a bigger rival soon.

Elsewhere, UBS slashed its price target on Thai Airways by 53% to THB8 per share. Thai Airways shares fell 2.3% yesterday. Malaysia Airlines (MAS) shares were steady yesterday. AmResearch maintained its "sell" rating on the stock, adding its expects MAS to follow in the footsteps of Singapore Airlines and cut its capacity further, due to weakening demand for air travel. 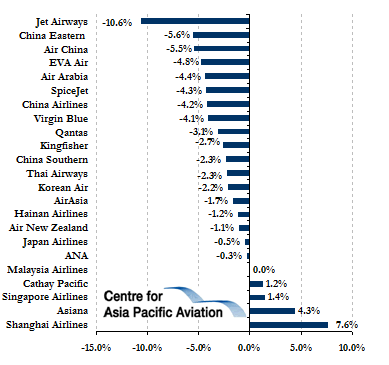