China Eastern’s Executive Director, Luo Zhuping, told the Wall Street Journal that the airline would increase capacity by 8-10% annually over the next few years.

A China Airlines spokesman stated net profits for the first eight months of 2010 would exceed TWD10 billion, supported by cross-Strait services to the mainland. The carrier generated a profit of TWD6.3 billion in the first half of 2010, on rising demand and average fares.

Thai Airways fell 3.3% ahead of today’s decision on the pricing of its THB15 billion (YSD483 million) share offer. The offer of 1 billion new shares is expected to be priced at THB31-34 per share, according to a Reuters poll – or a discount of up to 14% on Tuesday’s price. 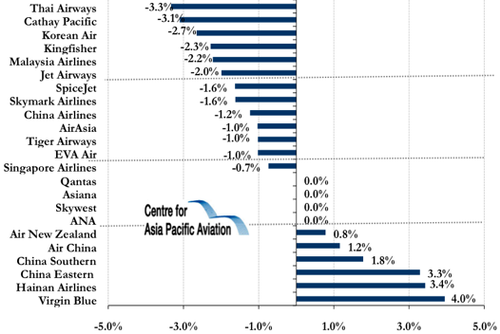