China Aviation Supplies Holding Company (CAS) and ICBC Financial Leasing Co Ltd (ICBC Leasing), a subsidiary of Industrial and Commercial Bank of China, signed new and firm agreements with Airbus on 28-Jun-2011 for a total of 88 A320-family aircraft. Valued at USD7.5 billion at list prices, they will be delivered between 2012 and 2015. No engine selection has been announced.

In the frame of the general terms agreement (GTA), ICBC Leasing signed a purchase agreement with Airbus for 42 of the 88 A320 family aircraft, leaving 46 for CAS. This is the first order that ICBC Leasing has placed directly with an aircraft manufacturer.

“We are delighted to receive a new order from our long-lasting customer CAS, and also the very first order from ICBC Leasing. These aircraft will contribute to the growth and success of China’s aviation sector, and we are proud to be their partner,” said Tom Enders, Airbus President and CEO.

Part of raft of agreements signed by Chinese Premier in Germany

The firm orders, hot on the heels of the Paris Air Show, occurred during a visit to Germany by Premier Wen Jiabao and was one of a raft of agreements worth more than USD15 billion signed during the visit.

China is Germany's fifth largest export market and the largest importer of goods into Germany, with bilateral trade volume in 2010 reaching USD184 million (+34% year-on-year), according to Reuters. Other agreements signed during the visit included agreements with Volkswagen, Daimler and BASF.

China typically schedules aircraft orders to coincide with international visits by its government. In Nov-2010, China and France announced 102 Airbus orders during a visit to Paris by President Hu Jintao, including 66 new contracts. Earlier this year, in Jan-2011, China announced final approval for 200 Boeing aircraft worth USD19 billion during a visit to the US.

A320 agreement follows reported delays to A380 announcement

The agreement also comes days after reports that China delayed the high-profile announcement of a USD3.8 billion order for 10 A380s by Hainan Airlines subsidiary, Hong Kong Airlines at the Paris Air Show, reportedly to protest over the European Union ETS scheme.

The Hong Kong-based carrier reportedly had to postpone the order as the Chinese Government failed to provide approval for the purchase, based on its disapproval of the inclusion of Chinese airlines in the EU Emissions Trading Scheme from 01-Jun-2011.

China has said it is “totally opposed” to what it considers an “unreasonable and illegal” extraterritorial tax and threatening to block European airlines from flying to the country. The China Air Transport Association (CATA), which represents the country’s airlines, has stated China will not comply with EU demands and it would take legal action against the plan.

CATA has also warned that the scheme could “severely impact” the “friendly cooperative relations between Chinese and European carriers, as well as European aircraft manufacturers”. Thus potential retaliatory trade measures, targetting European interests, are a considerable concern for many European parties, including Airbus. The Association estimates that the ETS will cost Chinese carriers CNY800 million (USD123.6 million) p/a.

While China continues to put the brakes of European widebody aircraft orders, it seems to be proceeding with narrowbody aircraft. It was not specified whether the 88 A320s as part of this order would be manufactured at the Tianjin A320 assembly plant, which opened in 2009.

Need for foreign aircraft before domestic production ramps up

Although China plans to start competing with Airbus and Boeing by constructing its own narrowbody passenger aircraft, C919, from the second half of this decade, China is still ordering large numbers of A320s and B737s to meet continued and expected growth in domestic demand, despite the threat posed by the expansion of the high speed rail network.

By the end of May-2011, there were 575 A320 family aircraft in operation with 13 Chinese airlines. According to Ascend, the fleet in China comprises around 76.3% narrowbody aircraft, with only 11.8% of the nation's total fleet widebodies. This correlates to the fact that 79.8% of China's total seating capacity is deployed in the large domestic market. Of the on-order aircraft, 50% in China are for narrowbodies, with just 20% for widebody aircraft.

Airbus is now the largest supplier of aircraft to China, based on existing and future orders, with 49% of them in service and 37% of the nation's on-order fleet.

China fleet breakdown for aircraft (in service at 27-Jun-2011) 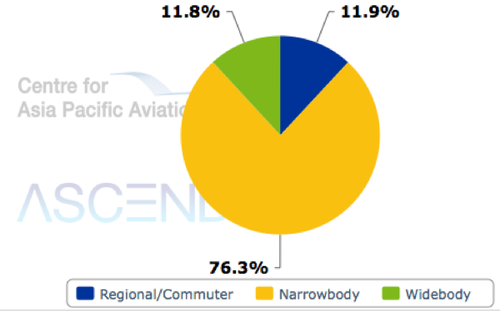 China fleet breakdown for aircraft (on order at 27-Jun-2011) 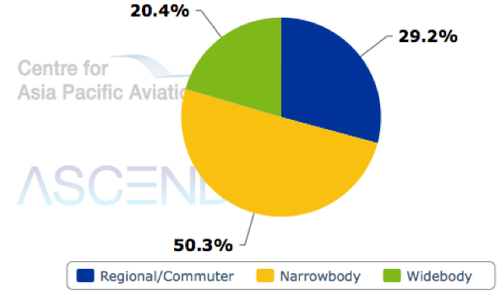 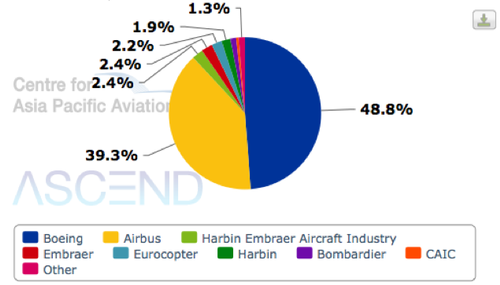 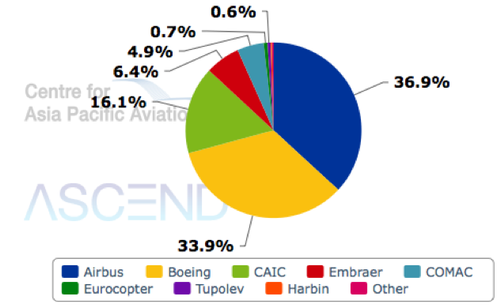 About ICBC and CAS

“Since the first A320-family aircraft was introduced in China in 1995, the Airbus single-aisle programme has played an important role in supporting the fast Chinese civil aviation growth. The A320’s high reliability and low operational cost have made them very popular among Chinese airlines. The outstanding eco-efficient performance of the Airbus A320-family will contribute significantly to the sustainable development of Chinese civil aviation,” said Li Hai, President of CAS.

“After a thorough assessment and study of the market, we have decided to place our very first order with Airbus for its A320-family. This strategic decision to start with the A320-family aircraft will help our customers to develop their business in the most profitable and sustainable way,” said Li Xiaopeng, Chairman of ICBC Leasing.

According to Ascend, ICBC Leasing’s largest customers are Shenzhen Airlines (nine aircraft), Air China (nine aircraft) and China Southern Airlines (five aircraft), with full service carriers holding the company’s aircraft. Chinese customers comprise more than half of the leasing company’s fleet, at 34 aircraft. Some 52% of the company’s fleet are narrowbodies, including 15 A320 family and 12 B737 aircraft. The only non-Airbus or Boeing aircraft on its books are two Harbin Embraer Aircraft Industry ERJ-145-LI’s leased to Tianjin Airlines. The lessor’s average fleet age is significantly younger than the lessor average, at 5.4 years. ICBC stated it has 68 aircraft in its portfolio at present. 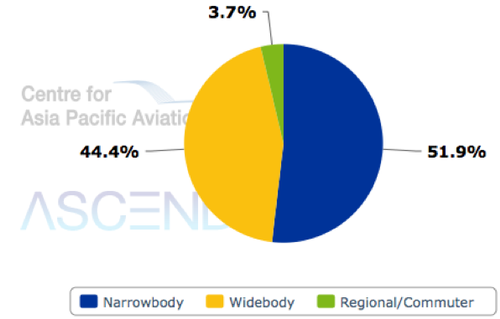 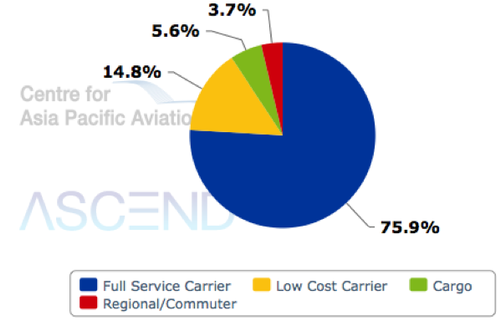 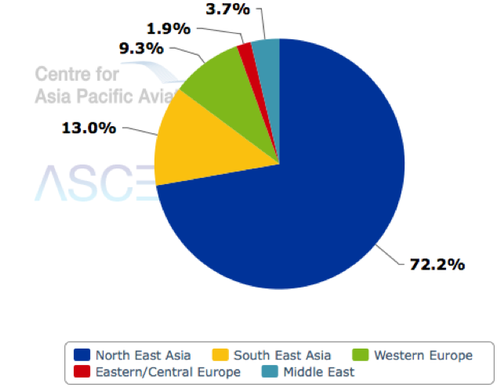 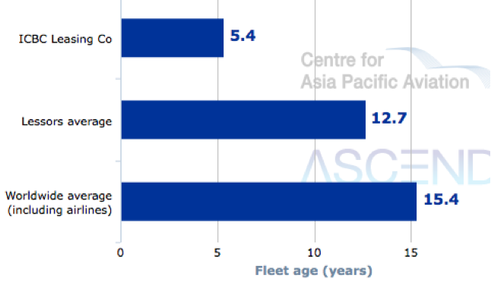 CAS, established in Oct-2002, is one of the six holding companies of the Civil Aviation Administration of China. Its predecessor was China Aviation Supplies Import and Export Group Corporation, founded in 1980, was the first company established by CAAC. The company is specialised in aircraft procurement and support services on aviation supplies. Over the past 30 years, it has purchased and leased more than 1400 aircraft for domestic airlines, and imported numerous airport supporting facilities, special vehicles, large-scale air traffic control systems and checkout equipment and so on. Its annual total import and export volume reaches more than USD2 billion, according to the company’s website. Since its establishment, CAS has entered into 14 framework agreements in total with Airbus and Boeing and purchased 779 aircraft. The company offers operating leasing, aircraft trading, sale and leaseback and asset management services.