Air China's shares slipped 0.2% in Hong Kong yesterday, but rose the most in two weeks in Shanghai trading (rising as much as 7.2% in intraday trading), after CAAC released new industry traffic data.

According to CAAC, China’s aviation industry has made a “massive recovery”, with Chinese carriers reportedly achieving a combined CNY8 billion (USD1 billion) profit in 2009 as of 12-Sep-2009, compared to a loss of USD4.1 billion in 2008. No breakdown of the profit figure was provided.

CAAC also stated passenger numbers were up 42% in Aug-2009 (following a 12% contraction in Aug-2008 due to additional security controls put in place for the Olympics), with cargo volumes increasing 18% year-on-year.

Shares in China Southern Airlines and China Eastern Airlines advanced by as much as 5.3% and 3.6% in Shanghai, although both ended the day down in Hong Kong, down 1.6% and 0.4%, respectively. 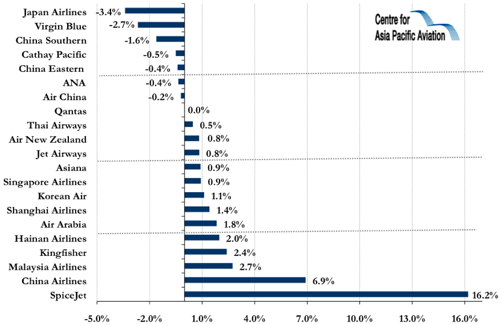 Japan Airlines' shares slipped 3.4% on Tuesday, as investors took profits following sharp gains on Monday, following news over the weekend of negotiations for a capital alliance between the airline and overseas counterparts, including American Airlines and Delta Air Lines.

The sell-off suggests that the market remains skeptical of the carrier’s prospects of returning to profitability, despite a three-pillar recovery plans to make "drastic reductions" to its route network (reportedly to include reductions of approximately 20% of its international network), a review of personnel costs (involving the expected reduction of 14% of its workforce) and a capital tie-up, possibly with an international partner. 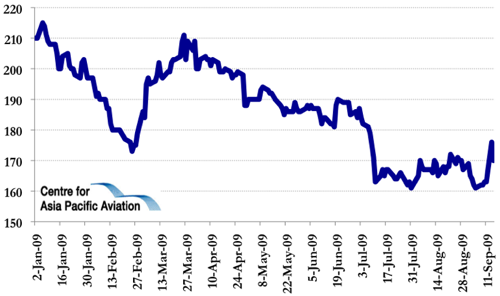 Also in Japan, ANA's shares were down slightly (-0.4%) on Tuesday, as the carrier reported an 8.0% reduction in domestic passenger numbers and a 5% gain in international passengers in Aug-2009.

In other traffic news, Singapore Airlines experienced double-digit contractions in both passenger numbers and cargo volume in Aug-2009, down 16.0% (to 1.4 million) and 16.9%, respectively, as the economic slowdown continued to negatively impact demand. 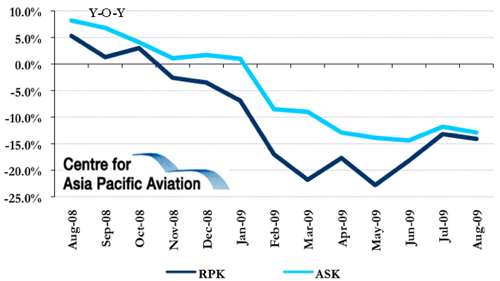 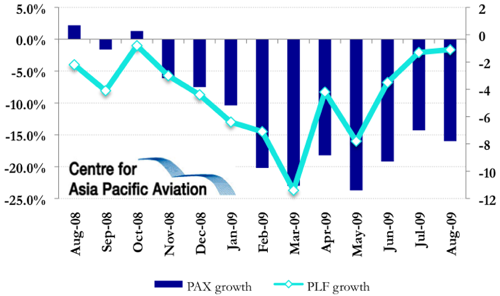 Shares in the listed Indian carries were up yesterday, as the Indian Oil Corp, Bharat Petroleum Corp and Hindustan Petroleum decreased jet fuel prices by approximately 3.2% on 15-Sep-09, following three consecutive increases. Leading the gains was SpiceJet, which soared 16.2% yesterday.