China Airlines’ shares fell 1.0% yesterday, upon the release of the carrier’s Oct-2009 traffic results, in which the carrier reported continued double-digit reductions in both passenger and cargo yields, of 17.5% and 15%, respectively.

Also in North Asia, China Eastern Airlines’ shares were up 3.2% yesterday, coinciding with the announcement that the carrier’s Yunnan branch reported a profit of USD38.5 million for the ten months ended Oct-2009, with revenue growth of 14% to USD625 million.

JAL warns of potential bankruptcy if pension reductions not achieved

Japan Airlines’ shares, meanwhile, lost 3.1% on Monday, after it requested retirees and employees to accept an average 40% reduction in pension payouts and warned the struggling airline could face bankruptcy if an agreement could not be reached.

In the South Pacific, Qantas’ shares gained 1.5% yesterday, on the same day as the carrier’s Qantas Investor Day. The carrier stated it would invest USD4 billion over the next two years as it purchases new aircraft and embarks on a campaign to improve its margins.

The carrier, meanwhile, dismissed rumours that it may consider resuming merger talks with British Airways , saying that consolidation is not on the carrier’s agenda.

AirAsia’s shares gained 0.8% yesterday, despite being cut from ‘trading buy’ to ‘sell’ by OSK, “on the back of lower average fares and higher fuel costs”.

OSK also downgraded AirAsia’s fair value to MYR1.13, “based on 10x FY10 EPS”, adding that it believes “the price undercutting (for air fares) and escalating crude oil price would persist in the short to medium term”. 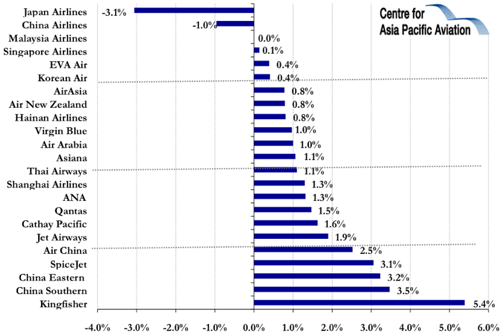