Shares in China Southern gained strongly yesterday, up 5.8% in Hong Kong trading. The carrier’s share price rose the highest since May-2010 in Shanghai trading, after Kenneth Fisher, the Chairman of Fisher Investments Inc, recommended the stock, stating the airline is a stock that investors can retain for "five to 10 years".

Korean Air operates most services between Asia and North America

Korean Air Chairman and CEO Cho Yang-ho in an interview with Wall Street Journal stated the carrier aims to become the main connector of services between Asia and North America, targeting international passengers travelling to destinations other than Tokyo. The carrier operates from Seoul to 15 Japanese cities, 12 cities in the US and Canada and 53 in Asia outside of South Korea, with the proportion of passengers from outside South Korea growing sharply, from 36% in 2007 to 56% in 2009.

Also in North Asia, China Airlines shares were up 2.1%. Taiwan’s largest carrier has agreed to pay a USD40 million fine following a U.S. Department of Justice antitrust investigation into fuel surcharges for air cargo shipments.  Meanwhile, shares in EVA Air slipped 0.4%, to be the only North Asian listed carrier to witness a share price reduction yesterday. 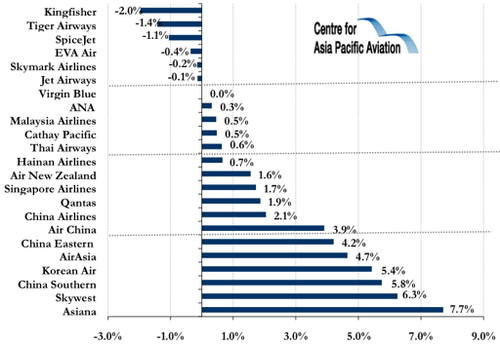