China Airlines stated it would join Sky Team Alliance, with the CEOs of Sky Team's 13 member airlines scheduled to visit Taiwan later this month and sign an LoI with the carrier.

After joining the alliance, the carrier stated it is expected to increase its destinations from 93 to 898 through codesharing with member airlines. The carrier added that its entry into the alliance would help reduce its operating costs, increase network flexibility and enhance revenues for the carrier. After the LoI is signed, there will be another six months of negotiations to finalise the details of the agreement. Shares in the carrier slipped 0.7% on Friday.

Kingfisher to join oneworld as full member in 2011

In the Indian market, shares in Kingfisher increased 3.4% on Friday, with shares in SpiceJet and Jet Airways declining 0.1% and 2.3%.

BA CEO, Willie Walsh, added that if the Indian Government amends its Foreign Direct Investment (FDI) legislation “all airlines around the world will look at the possibility to invest in Indian carriers” adding: “I have no doubt Indian carriers would welcome such foreign investment because airlines are looking at strengthening their financial position.”

Singapore Airlines on Friday appointed Goh Choon Phong to succeed Chew Choon Seng as the airline's new CEO when Mr Chew retires at the end of Dec-2010. Mr Goh is Executive VP Marketing and the Regions and Chairman of SilkAir. Mr Goh will formally take up the CEO position on 01-Jan-2011 and will join the airline’s Board of Directors on 01-Oct-2010.

Mr Goh joins the carrier at a crucial time, with the carrier facing growing competition for both premium and economy-class passengers (from Middle East carriers targeting business class traffic and LCCs attacking the leisure market) in Asia as it tries to revive profits from a two-decade low.

The carrier separately announced plans to raise fares from 01-Oct-2010, its third fare increase since Apr-. Fares are to reportedly increase by up to USD149 (SGD200) for economy and by up to USD744 (SGD1,000) for premium fares. The carrier stated the increases were a “function of market demand and supply and they are adjusted depending on market conditions”.

Meanwhile, Qantas Chairman, Leigh Clifford, in the carrier’s 2010 annual report released on 03-Sep-2010, warned that Qantas and Jetstar would have to compete "vigorously" in their respective market segments to succeed, as the Australian commercial aviation sector remains “highly competitive” both domestically and internationally. He said: "Aviation is a complex industry, subject both to long-term economic cycles and short-term shocks, with high fixed costs and long investment lead times. The industry is globalising unevenly, and still suffers overcapacity and high start-up and drop-out rates". Shares in the carrier remained unchanged on Friday."

Thai Airways on Friday announced plans to make a public offering of no more than 1,000 million newly issued shares with subscription scheduled on 16-Sep-2010 to 17-Sep-2010 at nationwide branches of Bangkok Bank (except Micro branches) and Krung Thai Bank. Proceeds from the offering will strengthen the carrier’s financial status and support its business expansion projects, as well as products and service improvement.  Shares in the carrier slipped 2.5% yesterday. 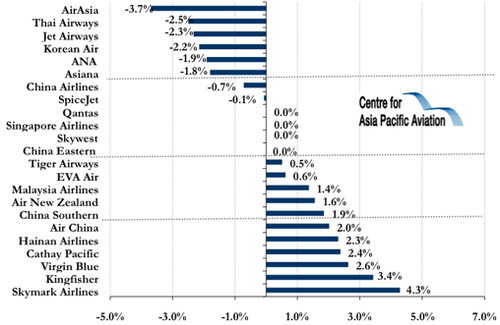