Asian airline shares were mixed yesterday, with SpiceJet shares down 4.1%, contrasting with the 5.1% increase in China Airlines' share price. However, the overall trend was for a reduction in share prices among Asia Pacific airlines.

This coincided with news that, for the third day in a row, crude prices closed above USD70 per barrel in New York (USD72.68), reaching an eight-month high, after the International Energy Agency raised its estimate for 2009 oil demand for the first time in ten months.

Qantas shares were up 2.2% yesterday, outperforming the 0.57% increase on the Australian Stock Exchange. Qantas CEO, Alan Joyce, announced plans to postpone or withdraw plans to float non-core units (including the carrier's engineering, pilot training, freight and Frequent Flyer units). The carrier has also cancelled its freight asset acquisition strategy, with the CEO stating, "buying assets like that is not appropriate, given that we're in a cash-capital preservation mode". The carrier also announced plans to reduce the strong Business-class focus on its A380 equipment, despite load factors on the services being approximately 10% higher than on its B747 services, as the configuration is "not right for us in the current environment".

Elsewhere, both Singapore Airlines and Kingfisher Airlines shares were down on Thursday, by 0.9% and 2.1%, respectively. There have been reports that the two carriers are in possible stake sale discussions, as Kingfisher reportedly seeks to sell a 25-26% stake in the debt-laden carrier. Singapore Airlines has recently expressed interest in investing in the Indian aviation market as a strategic investor. Japan Airlines shares also down, by 1.1%.

Cathay Pacific shares were also down yesterday, by 1.5%. The carrier reported a significant reduction in passenger numbers and yet another marked reduction in cargo/mail volume in May-2009, as the carrier continues to be negatively affected by the economic downturn, with has resulted in a "big slump" in premium traffic and reduced economy passenger numbers. According to General Manager Cargo Sales and Market, Titus Diu, "the story in May was very much in line with the first four months of 2009, with an overall weakness in the global airfreight business and continued soft demand out of Hong Kong and Mainland China". He added, "there are signs that the bottom of the slump has been reached, though visibility remains poor and there is no indication of any significant upswing in demand arriving soon". 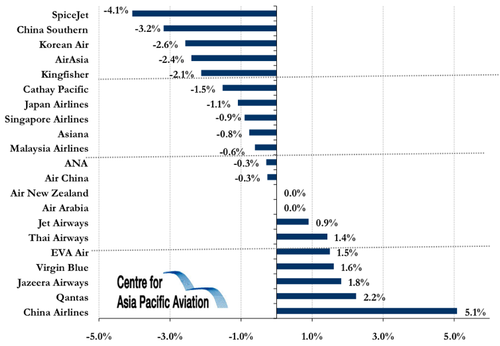