EVA Air, which relies on the freight market more than any other major Asian carrier, reported its cargo yield tumbled 29.8% year-on-year last month, while volumes were still down a massive 28.3% to 45,192 tonnes. The carrier’s passenger yield fell 10.3% last month – the third consecutive monthly decline – to just USD 5.6 cents per RPK. 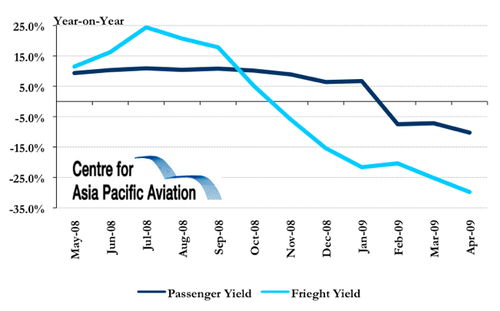 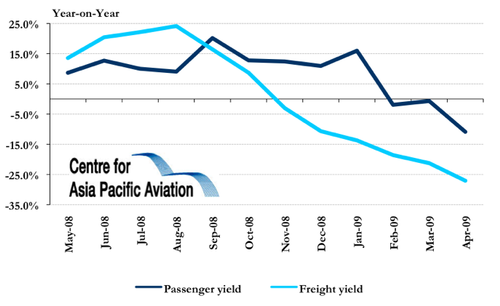 Outlook: Searching for the bottom

Airlines around the region are searching for some bottoming of the economic downturn – and are resorting to dramatic discounting on the way down. One of the world’s best managed airlines, Singapore Airlines, suffered a rare first quarter operating loss as yields slumped, while US carriers have reported unprecedented reductions in international yields in April. Qantas reported a hammer blow on yields in March, while Air New Zealand has put 1,000 staff on a salary freeze as its yields deteriorated sharply in April.

China Airlines’ Chairman, Philip Wei, told Bloomberg earlier this week that the carrier would “do our best to turn a profit” with oil at USD60 per barrel, helped by an increased number of services to Mainland China this Summer. He added passenger demand was currently running around 7% below expectations, with traffic affected by the swine flu outbreak.