China Airlines’ shares slipped 0.9% yesterday, despite the carrier reporting improved year-on-year yield improvements for Dec-2009. The worst may now be behind the carrier, after yields appear to have bottomed out in Jul-2009/Aug-2009.

During the month, the carrier’s passenger yield slipped 12.4% (off low double-digit growth in Dec-2008), although this was the smallest contraction in seven months. Cargo yield was up 10.0%, off a negative base in Dec-2008, for the largest year-on-year increase since Sep-2008, as the carrier benefited from improved Christmas cargo activity. 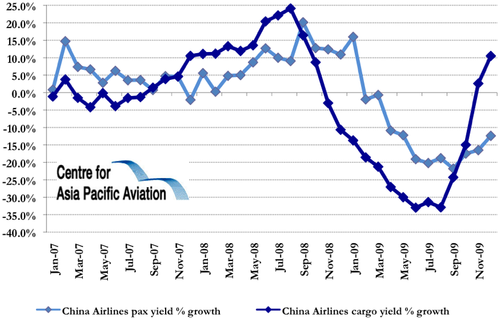 The improved yields also had a positive impact on operating revenues in the month, with total revenues soaring 37% year-on-year to USD360 million, driven by a 1.5% increase in passenger revenues (to USD180 million), and a notable 125% increase in cargo revenues (to USD163 million). Traffic results were also stronger, with passenger numbers rising 23% (to 915,000), passenger load factors improving 8.5 ppts (to 79.4%), and cargo traffic soaring 105%. 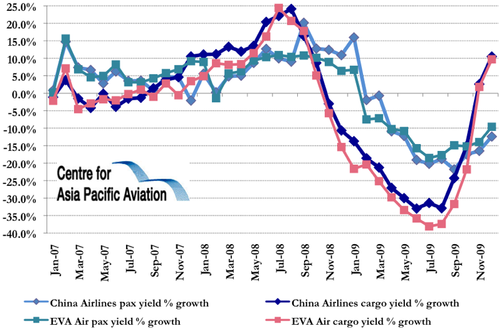 Meanwhile, Kingfisher Airlines’ shares remained stable yesterday, upon the release of the carrier’s financial highlights for the three months ended 31-Dec-2010. The carrier stated it is seeing improved traffic/demand levels, with “buoyant” demand expected to continue. The carrier added it is experiencing an “improvement” in both premium and economy yields.

However, in the quarter, the carrier reported revenue per RPK reduction of 19%, contributing to a 7% year-on-year revenue reduction, despite a 4% increase in passenger numbers and a 14.5 ppt load factor improvement. The carrier reported a loss after tax of USD92 million in the period (an improvement from a loss of USD90.1 million in the previous corresponding period), with an EBITDA loss of USD17.0 million. 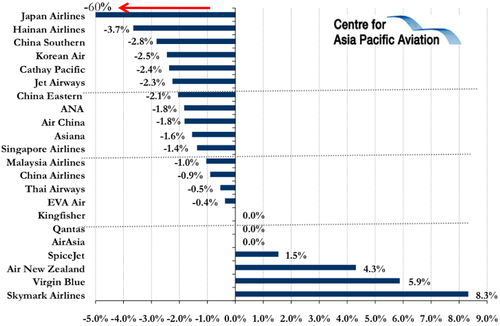