Cathay Pacific’s yield and passenger volumes improve in May-2010; remain below pre-crisis levels

Also in North Asia, Cathay Pacific  (shares up 0.1%) stated yield and passenger volumes improved in May-2010, compared to the same month in 2009, when the carrier’s business was negatively affected by the economic downturn and the swine flu outbreak. GM Revenue Management, Tim Owen, commented that, “although still below pre-crisis levels, the pick-up in demand in our premium cabins continued last month and the overall outlook for the summer peak still remains solid”.

Also reporting traffic results yesterday, although for the month of April, was JAL Group. The carrier reported a slight increase in domestic passenger numbers (increasing 0.5% to 2.8 million passengers) but domestic passenger numbers were down by double-digits, slipping 13.4% to 772,000. Load factors were up both on the domestic and international networks, by 3.4 ppts to 56.2% and by 5.2 ppts to 70.2%, respectively.

AirAsia X to be listed in Hong Kong or New York?

Meanwhile, AirAsia X is reportedly considering listing on the Hong Kong or New York stock exchange, following proposals from foreign investment banks pitching to secure the mandate for the carrier’s IPO. The IPO is likely to value the carrier at USD500-600 million. 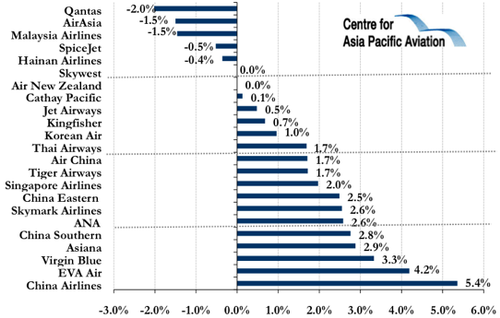