Taiwan’s leading airlines, China Airlines (+0.5% yesterday)and EVA Air, reported continued double-digit reductions in passenger yields, of 21.8% and 14.9% respectively, in Sep-2009. These falls are, however, an improvement from Aug-2009 and Jul-2009 levels, and come off a base of growth in Sep-2008. 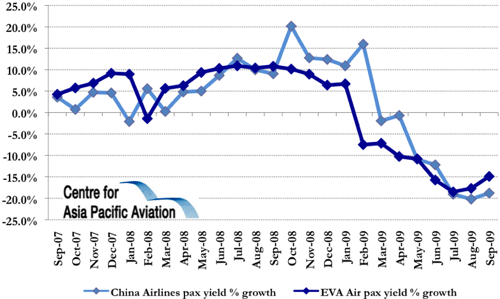 The ongoing global economic crisis is most clearly reflected in the painfully low cargo yields of EVA Air and China Airlines, which are among Asia’s largest airfreight operators. 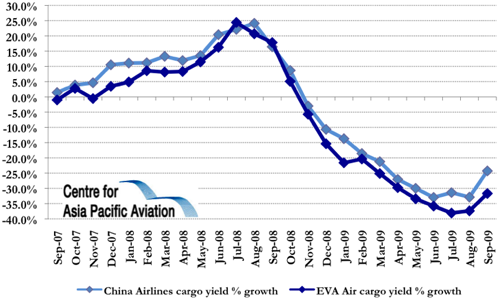 EVA and CAL face the prospect of a slow recovery in yields.  For the cargo segment, the coming weeks will be crucial, with airlines banking on signs of the usual pre-Christmas cargo rush.

Also in North Asia, Japan Airlines’ shares were up 0.9%, despite the carrier’s being further downgraded by Standard and Poor's from already speculative grades, following a previous downgrade less than three weeks ago.

S&P lowered the long-term corporate credit ratings on JAL and Japan Airlines International by two levels, from ‘B-minus’ to ‘CCC’ and maintained its credit watch with a negative outlook. The downgrade "is based on the recognition it is becoming more likely that JAL will opt for a debt waiver by its creditors or for a debt equity swap in its restructuring plan" under the supervision of a quasi-public body.

Kingfisher up 14.2% as dispute with Bharat Petroleum is resolved

Shares of Kingfisher Airlines rose 14.2% yesterday after the company was reported to have reached an out-of-court settlement with Bharat Petroleum Corp Ltd (BPCL) over a long-pending ATF payment.  Kingfisher, which reportedly owes BPCL USD67 million, will reportedly pay USD8.5 million in the next 12 days and the rest in 12 monthly instalments.

Also in India, Jet Airways’ and SpiceJet’s shares both gained by double-digits, up 12.7% and 10%, respectively. 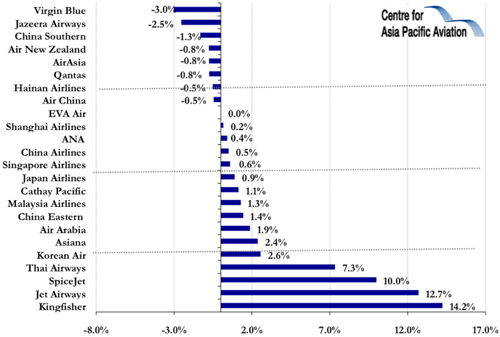