These figures represent only very slight improvements on July’s reductions. 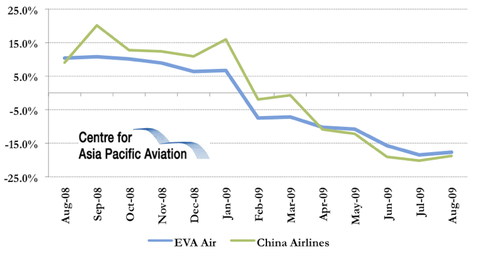 Across the Taiwan Strait, Cathay Pacific stated that the Summer peak traffic “arrived much later and at a lower yield than normal”, although it did see a “strong recovery in pent-up regional demand” in August, as the impact of swine flu abated.

Crucially, traffic in the premium cabins “remained weak” in comparison to previous August months, according to Cathay, “and at materially lower yields." This is despite a 5% reduction in passenger capacity by Cathay last month.

The ongoing global economic crisis is most clearly reflected in the shockingly low cargo yields of EVA, CAL and Cathay – which are among Asia’s largest air freight participants. 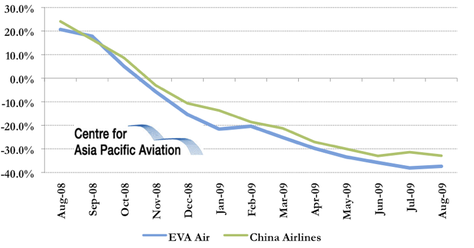 Cathay Pacific stated its cargo business “showed further signs of bottoming out in August”, with the lowest year-on-year tonnage decline of the year to date and a continued increase in demand out of the key home market.

But while tonnage is picking up “there is still a lot of competition in the market and our yield has yet to see any significant pickup from a very low base”, according to Cathay. This is despite a 14.1% reduction in cargo capacity last month.

EVA, CAL and Cathay face the prospect of a painfully slow recovery in yields. Falls of this quantum are not easily – if ever - recovered.

The Taiwanese carriers can at least look forward to the effect of expanded (scheduled) cross-Strait services on their passenger businesses from this month. Some of the routes, eg to Beijing and Shanghai, can be quite high yielding. But for Cathay, this development represents yet another setback in the recovery of its core premium markets.

For the cargo segment, the coming weeks will be crucial, with airlines banking on signs of the usual pre-Christmas cargo rush.

Lufthansa Cargo recently stated it is planning to increase its rates by 25% over the next few weeks in an attempt to reverse its “dramatic” recent decline in yields. The German carrier noted that if current market trends continue over the medium term, “the majority of the world’s freighter fleet would have to be permanently grounded because there would be no economic justification for keeping the aircraft in service”.

It is a dire warning, designed to soften up shippers into accepting higher rates. But an upward movement in prices will depend on underlying levels of demand, coupled with ongoing capacity restraint by industry participants. Neither is guaranteed.