Taiwan’s Taiex Index gained 0.7% yesterday and has advanced 2.2% this year after surging 78% in 2009 as improving relations with China boosted capital inflows. Both EVA Airways and China Airlines have benefited from operating direct service to China.

The carrier is in talks with local and foreign creditors to remove debt covenants, which will allow Thailand’s Ministry of Finance to reduce its stake in the carrier from 51% to 49.9%. State Enterprise Policy Office Director General Somchai Sujjapongse stated the ministry is “ready to consider that”, as the carrier “will be more flexible and better able to compete with the private sector” if it is not a state enterprise.

Skywest yesterday stated it expects lower net profits for 1H2010-2011 due to one-off costs incurred by adding new A320-200 aircraft to its fleet and AOC but added that it expects basic operating performance for the six months ending 31-Dec-2010 "to be slightly ahead" of performance in the previous corresponding period. The carrier’s shareholders, meanwhile, approved a dividend of SGD 1.10 cents per share. 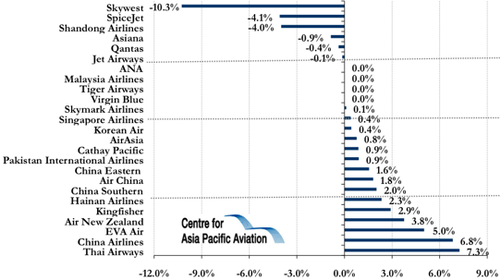