Shares of China Airlines and EVA Airways staged a rally in Monday trade with EVA Air trading up 7.0% and China Airlines 4.4% stronger, after direct services between Taipei International Airport - formerly known as Songshan Airport – and Tokyo Haneda resumed following a hiatus of 31 years.

China Airlines and EVA Air will provide 14 weekly services on the route. According to Hua Nan Securities, the resumption of the service is expected to boost the number of Japanese tourists to Taiwan by around 10% p/a.

Taking the Songshan-Haneda flight resumption into account, Hua Nan Securities stated China Airlines is expected to post an earnings per share (EPS) of TWD2.79 (USD 9.16 cents) in 2010 and TWD3.07 (USD 10.1 cents) in 2011. This compares with a loss per share (LPS) of TWD0.83 recorded in 2009 when the global economic meltdown hit the airline business.

Shares in All Nippon Airways, Asia’s largest listed carrier by sales, agreed to plead guilty and pay a USD73 million criminal fine related to “two separate conspiracies” to fix prices in the air transportation industry, according to the US Justice Department. The carrier’s stock slumped 3.9% to JPY293 yesterday. 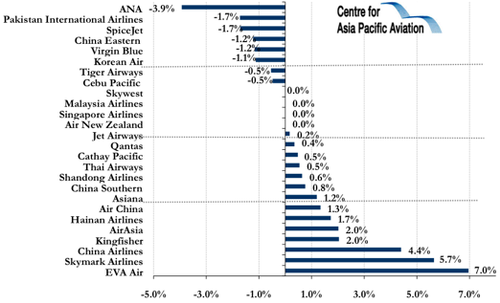