Privately-owned Philippine LCC, Cebu Pacific, reported a net profit of USD38 million 1H2009, a turnaround from a net loss of USD325,000 in the previous corresponding period, as revenues increased 2.1% (to USD236 million) in the period.

The carrier has increased its fleet, network and capacity in 2009, with the carrier stating that its “low-cost carrier strategy has made more and more people utilise air travel for business and leisure travel”. The airline also benefited from sharply lower oil prices than in the previous corresponding period.

GOL gained 0.8% in New York trading yesterday and 4% in Sao Paulo trading, the largest gain in more than two weeks, on the prospect that reduced oil prices will reduce the company’s costs.

Southwest's shares fell 1.8% yesterday. The carrier has reached a resolution with the FAA, under which Southwest will replace certain parts on flap exhaust gate assemblies on 82 of its B737-300/500 aircraft by 24-Dec-2009. The carrier will also carry out an inspection of the assembly every seven days on affected aircraft until the replacements are made.

In other Southwest news, the carrier has published a new schedule, covering the 09-Jan-2009 to 12-Mar-2009 period, aimed at better accommodating the decline in air traffic demand and seasonal Winter demand levels. The airline will reduce one daily service on 92 routes and increase services on 42 routes (usually by one daily frequency). Despite adding four new cities in 2009, the carrier expects to operate approximately 6% fewer flights in 2009 compared to 2008 levels (the carrier has previously stated it would reduce FY2009 capacity in the 5-6% range,).

In Europe, Air Berlin shares slipped 1.1%. BlueBay Asset Management Plc’s BlueBay Multi-Strategy (Master) Fund Ltd and BlueBay Global Convertible Bond Fund have reportedly acquired convertible bonds in the carrier, which can be converted into 3.99 million shares between 17-Nov-2009 and 15-Aug-2014, which would give BlueBay a possible 5.2% stake in the airline’s voting rights.

Meanwhile, the Vienna Stock Exchange yesterday suspended trading in SkyEurope Holding shares until further notice, after the LCC filed for bankruptcy as it struggled to restructure debts. SkyEurope has suspended all flights with immediate effect. 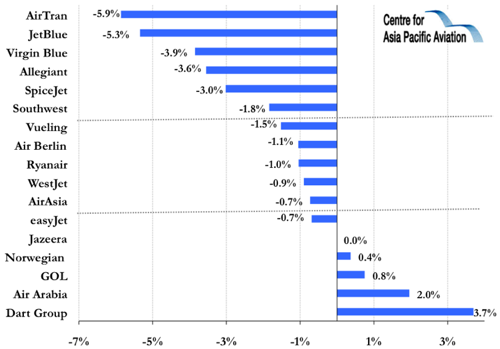