Cebu Pacific gained in its trading debut in Manila after the carrier completed the nation’s largest IPO in five years. Shares in the carrier opened at PHP132 (USD3.06), a 5.6% premium on its issue price, closing up 6.4% at PHP133.

The Philippine stock market has risen more than 40% this year, the second best performer in Southeast Asia after Indonesia, and closed at a record high yesterday.  According to Bank of the Philippines Islands: “Cebu Air offers a good play on Philippines tourism and a proxy on consumer spending. At its IPO price, the stock is valued at 13 times estimated earnings, which is cheaper than the overall market.”

Allegiant and JetBlue strengthen in US

Allegiant Air (+2.1%) and JetBlue (+2.1%) emerged in positive territory after a choppy day’s trade in the US. Both stocks were among the top US airline stocks yesterday, with JetBlue trading at a 52-week high of USD7.27, 18% above its 50-day moving average. SmarTrend maintained its bullish outlook on the stock. Brazil’s Gol, which is also listed on the NYSE, was another strong gainer, adding 1.9% during trade.

Shares in Skymark Airlines declined 4.3% following a strong week as the Japanese LCC’s shares soared on news it more than doubled its net income forecast for the 12 months ended Mar-2010 to JPY5500 million (USD67.8 million) on the back of strong sales. 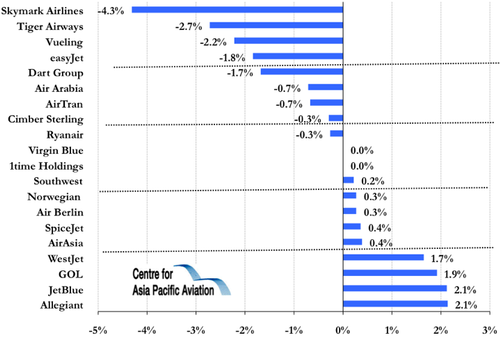