The carrier handled 2.0 million passengers in the month, a 1.5% year-on-year improvement, predominantly driven by rising Economy demand. The increase in passenger numbers was achieved despite a 4.7% capacity (ASKs) decline, which “helped push up load factors [up 6.3 ppts ot 82.0%] and improve average yields a little off their low base”.

Cathay Pacific GM Revenue Management Tom Owen, added that the carrier is “encouraged to see a modest rise in the number of passengers flying in our premium cabins, though still at volumes and yields well below what we were seeing before the economic crash in late 2008.” Investors were probably hoping for more encouraging news on the yield front.

Cargo volume was up 7.6% year-on-year in the month, driven by “strong demand” out of Hong Kong and Shanghai in the pre-Christmas period. A 12.9% reduction in cargo capacity in the month helped push up the cargo/mail load factor by a notable 12.3 ppts to the highest level seen so far in 2009 (at 76.8%).

Cathay Pacific General Manager Cargo Sales & Marketing, Titus Diu, added that demand was particularly strong to North America and Europe, with the carrier “pleased to see further increases in yield”. However, he added that the company “remains cautious about the outlook for demand after the current seasonal peak.”

China Southern Airlines’ shares were down slightly (0.8%) yesterday. The carrier reported double-digit passenger and cargo improvements in Nov-2009, with passenger numbers up 13.9% to 5.6 million, driven by growth across all markets (domestic pax were up 13.4%, regional (HK/Macau) numbers soared 36.3% and international levels were up 153%). Load factors were up 1.9 ppts to 77.5%. 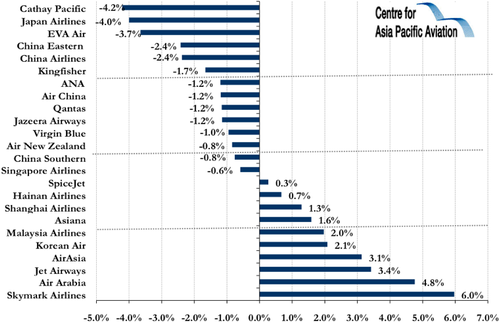 China Eastern moving away from its difficulties; profitable in ten months to Oct-2009

China Eastern Airlines’ shares were down 2.4% yesterday. The carrier has reported a CNY1.85 billion (USD271 million) profit in the ten months to Oct-2009, with passenger numbers up 19.8% year-on-year, prompting GM, Liu Shaoyong, to state that the carrier is "moving away from its difficulties".

The profit figure is dwarfed by the CNY9 billion (USD1.3 billion) in government subsidies poured into China Eastern since the beginning of the global economic crisis, and its debt-asset ratio remains high.

The Shanghai-based company is  currently preparing for a share placement (USD1.0 billion) by the end of 2009, to reduce the carrier's debt/asset ratio to 94.7%. The carrier has further plans to reduce this to 80% through a variety of means, including the possible introduction of strategic investors.

Elsewhere, shares in Japanese LCC, Skymark, soared 6.0%, with AirAsia also rising, by 3.1%. Among the decliners, Singapore Airlines slipped 0.6%, with Qantas and Japan Airlines down by 1.2% and 4.0%, respectively.